“As an athlete, you test your physical parameters a lot, and a lot of what sets those parameters is how you fuel your body. I think the common phrase is ‘you are what you eat’ and there’s a lot of truth to that. And when you’re eating a well balanced diet, you’re able to recover faster after workouts, and be able to build muscle rather than having a junky diet where maybe you don’t have enough protein or enough carbs to recover, and you’re not gonna be able to build muscle,” said senior Robert St. Laurent who is the captain of both the Keene State men’s cross country team and the Keene State men’s track and field team.

Sports Nutrition Professor Jeffery Timmer said carbohydrates are especially important to consume before exercising because they are a key energy source.

“The average person, we suggest around 55% carbohydrate or 50% carbohydrate is their normal diet. The average person like an athlete playing soccer, we’d probably try to get closer to 65% carbohydrate,” Timmer said. “We live in a country where the media tells us that we should eat more protein and less carbohydrates. Basically, less sugar is what they suggest, and that’s fine. I’m okay with eating protein. But what has happened is we have people trying to exercise with a lack of carbohydrate. And ultimately, what that’s going to do is it’s going to make you feel fatigued.”

St. Laurent said his go-to precompetition meal is something carbohydrate heavy with a decent amount of fiber.

“I usually reach for like a whole wheat bagel, probably like three hours before my race…sometimes I put peanut butter, maybe even cream cheese on it, and just reach that satiety point, because if you just have a bunch of cereal or something it’s gonna fill you up momentarily, but in a couple hours you can be hungry again and you can feel that during the race. But when you eat something with a lot of fiber and a decent amount of fat, it’ll keep you full longer,” St. Laurent said.

Junior Emma Stelzner, a diver on Keene State women’s swimming and diving team, said she doesn’t usually eat much right before her meets because she doesn’t want to feel nauseous. However, Stelzner said, “sometimes I’ll eat a granola bar or something, just have a little something in my stomach so I’m not too anxious.”

Timmer recommends that student athletes eat a precompetition meal containing a high number of calories about three to four hours prior to exercise.

“Realistically you wanna be over 190 [calories] if you plan on performing well. We call it a precompetition meal, but it is that, it’s a meal.” Timmer said.

Timmer states that the effect of the pre-competition meal also depends on the athlete’s regular diet.

“If your diet for the last week has been horrible, that pre-competition meal isn’t going to make a great effect. And so this is a season-long for an athlete, or really [it’s] a yearlong behavior. You have to be on top of your nutrition the entire time… If you don’t eat correct to recover, then you’re just going to kind of go through the motions and not have great performance throughout the season,” Timmer said.

Stelzner explains that consuming fast food on a regular basis has a negative effect on sport performance.

“If I’m eating McDonald’s and Wendy’s 24/7, like no fruits, no veggies, no protein, I will feel all the McDonald’s and all the Wendy’s hitting me [at the meet]… But for me, I’m eating a diet where it’s high protein, high fat, and then a good amount of carbs in there and that’s been helping me,” Stelzner said.

In addition to the food portion of nutrition, Stelzner said it is important to stay hydrated as well. “If you’re not drinking enough water, you’re definitely going to feel lightheaded. You might be more prone to more headaches, you might be feeling dizzy, you might faint,” Stelzner said.

St. Laurent said it’s also possible to drink too much water and over hydrate, which has similar effects.

“If you’re just sitting there chugging water all day, you’re not getting any electrolytes, which is like the salt, potassium, the calcium, the magnesium, stuff like that. If you’re not getting that into your body, then you can be diluting your electrolyte stores, and that’s gonna cause you to feel the same kind of dehydration symptoms, so it’s that balance,” St. Laurent explains.

To maintain that balance, St. Laurent likes to drink electrolyteinfused beverages. “So before a race I’ll have these little things called Nuun Tabs, and I put them into my water, shake them up, and it adds those electrolytes…that’ll keep me I guess fully hydrated throughout the race,” St. Laurent said.

Another thing student athletes may consume before exercising are supplements. Timmer said supplements could have some positive effects on sport performance when taken safely and effectively.

“We live in that pre-workout supplement age. The preworkouts, they’re really like all stimulants. From caffeine to other stimulant sources, and basically really trying to get that heart rate elevated to get you prepared for that high intensity exercise,” Timmer said.

Timmer said caffeine and creatine are both stimulants that could be helpful while exercising. “Caffeine can have a little benefit mobilizing fat to the muscle so that it can be used for energy,” Timmer said.

“…Creatine monohydrate specifically, if you get ultimately about two to three grams per day, that has been shown to help recovery. So when I talk about recovery, I’m talking about kind of in between high intensity sets. So, if you take creatine and you’re a weightlifter, creatine doesn’t affect your first set. Creatine affects your second set, your third set, your fourth set, your fifth set. So you can actually do more work in subsequent sets because the creatine helps you recover in between sets… All of those are better in training. And if you can do that in training, ultimately you’re working harder and so the adaptations are better, and hopefully performance then follows,” Timmer explains.

While there are some positive effects of taking supplements, Timmer warns student athletes to research before purchasing them. 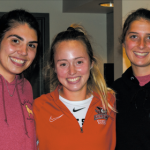