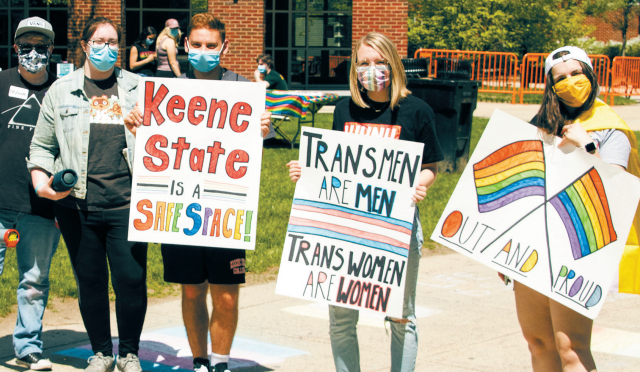 Now that it’s October it’s also LGBTQ+ History Month. This year is the 27th annual celebration of LGBTQ+ History Month, dedicated to remembering important moments in the history of lesbian, gay, bisexual, transgender and queer people and to remind both the LGBTQ+ and other communities of important roles LGBTQ+ people have taken in creating the social, legal, and political world we live in today.

Coordinator of LGBTQ+ Student Support, Hunter Kirschner loves LGBTQ+ history month. He loves taking the time to reflect and acknowledge the history in the LGBTQ+ community. LGBTQ+ is not often talked about in schools so sometimes there isn’t an opportunity to learn that important part of history and having the month gives that time to learn. “It’s important in helping to understand the context we are all in”.

Kirschner says that LGBTQ+ History Month is important to him because he knows who has come before him and that he is not alone in these experiences. “I have the energy, passion and love and brilliance of generations of LGBTQ+ people who have lived, survived, thrived before me and so that instills a lot of hope and optimism about what’s possible”.

Someone that stands out in LGBTQ+ history to Kirschner is Lou Sullivan, who was one of the first transgender men who built community of transgender people in the 1970’s. He founded a publication called The Gateway. “He was able to really be this catalyst for the ripples that continue to be felt and seen and is supporting me. So just being able to trace that back and that’s another important thing for me, and LGBTQ+ history, is being able to recognize, that I am a part of this legacy and what has made it possible for me to be here and be who I am and how I can work to create a space for students”.

KSC Pride Club is student-led and started sometime in the 1980’s. Over the years, Pride’s mission changes depending on the students and the culture we are in at the moment. Currently, KSC Pride is creating spaces and opportunities where people can be who they are and be proud. Where no student feels like they are “having to sacrifice this piece of who they are, in terms of gender or sexual identity in order to belong on this campus”.

President of Keene State College, Melinda Treadwell said that LGBTQ+ History Month is important. “I think we mark milestones through the things we call our attention to.” Treadwell said she likes that it gives the college a chance to focus attention on our LGBTQ+ peers for a moment. She said she hopes that KSC can do more programming for all the months that signifies important marks as they should be “educational and fun”. Melinda Treadwell says she loves being a part of different events involving the students.

Treadwell says that her and Keene’s mayor works very closely during this month and Pride month to make sure the LGBTQ+ community feels welcomed and accepted not only on campus but in the city of Keene as a whole. “I want the students that come here to have a very positive experience on campus and off campus”.

“Our world is evolving”. Melinda Treadwell says she is proud and believes we are welcoming and working hard as a community to value all differences. “There are many forms of difference, but I think that’s what makes us beautiful. We are truly a multicultural and diverse community”. Treadwell said she thinks the younger generations are doing a good job on opening everyone’s eyes and acting on the things in our world that need to be changed so everyone feels accepted for who they are. As a college, she says that we must listen to the students. The college has made changes to make for a more welcoming environment, like adding a prefered name when applying.

Treadwell said that having hard and uncomfortable conversations about experiences is educational and helpful for everyone, so we are all aware of what is happening and how to resolve it. There is a conduct process where there is no tolerance for discrimination or bias. Treadwell also added that student voice must be one of the top priorities.

Dottie Morris, Vice President for Diversity and Equity, also added that there is a process where students or staff can report discrimination of any kind. The report is then discussed, and actions are made. “If we don’t know it’s happening we can’t do anything about it”. Morris said she encourages everyone to report any issues they have, hear, or see so we can make for a better environment and supportive campus.

One event that stuck out to Melinda Treadwell was a potluck with speakers and a march. She said it was with friends, family and other community members getting together for a day of celebration. “I think a part of holding our history and pushing for a better future are coming together”.

On October 27, Rafiki, a Kenyan film is being shown about two women and what happens when they embark on a same sex relationship. Some lunch talks and other events, like the s’mores night, are also being held this month.

Morris said she’s excited and said that LGBTQ+ history puts a highlight on the achievements and people in history surrounding LGBTQ+.

Morris also mentioned that KSC has done workshops on language surrounding LGBTQ+ and having a safe space for all students.

“A part of why we are here is to support students and create a learning environment that allows all students to benefit from it”. Pride puts on a “Second Chances Prom” in the fall to have a chance to go with who they want and dress how they want. This year, Second Chances Prom is November 5 in the Mabel Brown Room and gives all students a chance to celebrate and welcome everyone. In the spring, KSC Pride is doing a parade with speakers and activities.

Hunter Kirschner is also working on some upcoming events like talks, Trivia, sprite day, and Crafter-noons where they are making pronoun pins on the 20th of this month for National Pronouns Day. One upcoming event he is excited about is doing activities in remembrance of a protest that happened in San Francisco in October of 1969.

“We are not perfect. I don’t believe that there are any places within this country that are completely free of anti-LGBTQ+ attitudes or behaviors. I have been told on more than one occasion by students that why they chose to come to Keene is what they say in terms of programming and support for LGBTQ+ students and that their experience had mirrored that. It had turned out the way they thought it would, they felt very supported and not targeted based on those identities’’.