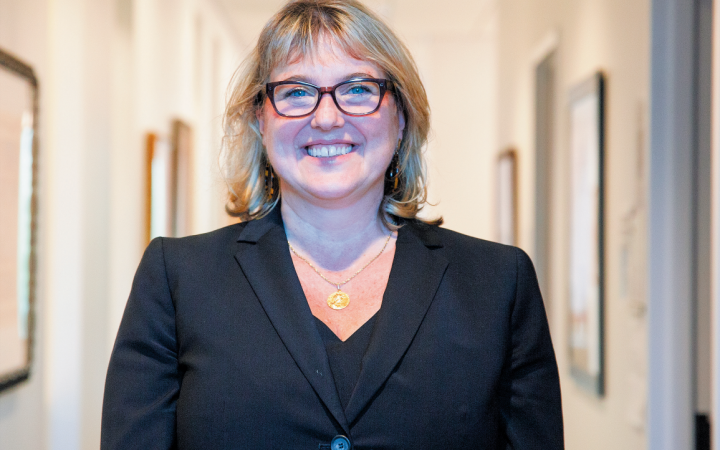 Dr. Elisa von Joeden-Forgey pictured outside of her office on the second floor of the Cohen Center for Holocaust and Genocide Studies

When Dr. Elisa von Joeden-Forgey was in college, she had many jobs.

Retail, waitressing and even an accountant, von Joeden-Forgey “always had about three or four jobs going just to pay the bills,” she said.

Despite working as a professor at Keene since Fall of 2020, von Joden-Forgey has had an extensive career in anti-genocide work.

“I finished my undergraduate [degree] in 1991. And at that time, genocide studies was just emerging out of Holocaust studies… I took a course on Turkish history at Columbia University that never mentioned the Armenian genocide. So what we knew about was the Holocaust and the Rwandan genocide hadn’t happened. The Bosnian genocide hadn’t happened. There were some cases that had happened, but they were not discussed,” she said.

“I started out as a historian,” von JoedenForgey said, “I sort of saw the study of the Holocaust, and other genocides as a form of witnessing that in and of itself may bring about change. But after a while, that became frustrating to me, because, you know, in the 21st century, we’ve just seen one genocide after another.”

After becoming the first Vice-President of the International Association of Genocide Scholars (IAGS), a small non-governemntal organization (NGO) invited von JodenForgey and her colleagues to view the destruction caused by ISIS in Iraq.

She noted that travelling to Iraq was interesting, “I took a night flight out of Vienna to Erbil, which is a city in northern Iraq and Iraqi-Kurdistan…I think I was the only woman every time I went on that night flight. It was an incredibly multinational group of passengers. But they were mostly young men dressed in fatigues, or other sorts of military style outfits that were, you know, heading to Iraqi Kurdistan to fight in one on one side or another,” von Joeden-Forgey said.

“We had about 10 days of very intensive travel along the security and the unsecured war zone battle line,” von Joeden-Forgey said. She added that at one point, she and her colleagues were about 1 kilometers away from ISIS territory. “The reason we were going so close to their territory is that the people who invited us wanted us to see the mass graves that have been newly discovered as ISIS was forced out of the region and to see destroyed towns so and then to meet survivors of ISIS genocide,” she said.

While in Iraq, von-Joeden Forgey saw mass graves and other atrocities in Iraq. “I had seen mass graves from previous genocide and I had seen sites of mass atrocity…I had been in Bosnia in 2007. And we saw some newly on earth mass graves. But that’s, of course, from a genocide that took place between 1992 and 1995.”

“One of the most frustrating things was when you’re so deeply immersed in trauma, to return to a place where, you know, people are just going with their regular lives, they don’t really care about Iraq, they don’t want to hear that much about it’s so frustrating,” she said.

After Iraq, von Joeden-Forgey spoke at the United Nations, during which she said she was “totally nervous.”

“The first time was really scary…I was speaking of the first ever day of commemoration of victims of genocide that occurs now every December 9th, but this was 2015 and December 9, and first time, and so I was speaking on a panel, along with the Special Advisor to the Secretary General for genocide prevention, and some other scholars,” she said.

She spoke at the United Nations again at a UN conference on religious diversity. “I learned that in these diplomatic circles, you can count on being treated well, they’re extremely kind, friendly, and respectful. So you know, that was lovely, they put people at ease, this is their job. They’re all professional diplomats, and they’re really good at it,” she said of the experience.

Currently, von Joeden-Forgey teaches in the Holocaust and Genocide studies department and also helps students get involved in anti-genocide work. Some of her students even work on a podcast called “the Anti-Genocide Coffee Break” and other projects.