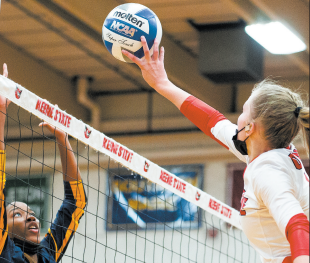 Keene State volleyball fell short 3-1 against UMass-Dartmouth in a game at the Spaulding Gymnasium on Saturday afternoon.

The scores for this game were 23-25, 25-16, 19-25 and 21-25, respectively. This loss is the first time the Owls have lost to UMass since 2004 and the Corsairs have not taken a set from the Owls since 2013, losing 22 straight before a 25-23 win in the first set. Keene attempted to fight back, scoring five in a row to put them on top 23-22. Unfortunately for the Owls, kills by the Corsair’s firstyears Kate Wade and Zoe Dizenzo put the Corsairs back in front and an attack error by Keene had them playing from behind.

In the second set, KSC junior Sydney Johnson and sophomore Cassidy Samuelson had a total of ten combined kills and just two errors to go along with 14 digs. Johnson and Ali McLoughlin powered down consecutive kills to put the Owls ahead 14-12, and they would never trail again. Spikes by Samuelson and Emilyann Ashford pushed the lead to five and there were no other problems for the Owls after that. After UMass drew within 15-14, they were outscored 10-2 down the stretch. KSC had 11 more digs in the second and would take that set, 25- 16.

The momentum of winning was short-lived when they fell behind, 8-2 in an important third set. That would also be the closest the Owls would get, eventually trailing 12- 5, four of the five points for Keene along with a service ace by Kacie Blanchet made it 13-9 but UMass put up the next two and was up 18-12 after KSC attack errors. After Keene put up three points, UMD came back with three points of their own adding up to a 23-16 lead for UMass. A swing by Lauryn Latimore ended the set. This would put UMass ahead two sets to one.

The fourth and final set was again won by UMass, turning a 5-2 deficit into a 13-9 lead with an 11-4 burst. The stretch began with four consecutive kills and two Corsair blocks would widen the lead 17-12. After two Owl errors and an ace by Gabriella Monico, the lead became 20-15. Keene State got within two twice thanks to a kill from Ashford that made it 22-20, but unfortunately for the Owls, a swing from Laing and an ace by Dizenzo brought up match point, allowing UMD to take this one after an attack by McLoughlin went into the net. This loss makes Keene State 11-8 and 2-2 in LEC play.