An away loss for FH

Keene State field hockey suffered a loss against Smith College Thursday night with a score of 4-3. This loss makes Keene’s record 3-8 this season.

The first period started with senior Channy Cornell as the goalie for Smith and sophomore Molly Edmark in goal for the Owls. The first goal was scored early on in the first period by Smith’s junior forward Grace Moorhead off an assist by first-year Kyleigh Poot. This goal was Moorhead’s second goal of the season and gave the Pioneers an early 1-0 lead. Keene State would score the second goal of the game about six minutes after the first. This solo goal would be scored by Keene State’s highest scorer this season, first-year Irini Stefanakos. At the end of the first period, the Owls and the Pioneers were tied 1-1.

The second period started off with another early goal from Smith, and was the only goal scored in the period. This lone goal of the period was scored by junior midfielder Victoria Mellow off an assist from sophomore Abbey O’Meara. This was Mellow’s third goal of the season. This period brought about two shots for Keene State, one by junior Hailey Patridge and the other by Stefanakos. Besides the goal, Smith took one other shot, this one by sophomore Laura Dreher.

Another early goal by Smith started out the third period, this goal by sophomore Karlie Guimond, her fourth goal of the season. This, again, would be the only goal scored in this period. This period, Keene State took four shots, the first and second by Stefanakos, and the third and fourth by Patridge. Besides the goal, Smith did not take any other shots this period.

Going into the final period, Smith was ahead 3-1, Keene State was looking to make a comeback. This period was the most eventful of the game, with three goals being scored. The first was three minutes into the fourth period, this time, by Keene State junior Ellie Hunkins off an assist by firstyear Hannah Wood. This goal was Hunkins eighth goal of the season and helped Keene State make a comeback. Keene State would score another goal two minutes later, tying the game. This goal was scored by junior Maggie Cahoon with an assist by Stefanakos. The last goal of the game was scored by Smith’s first-year Elena Korinek, her third goal of the season, giving Smith the win.

The Owls will be back in action Wednesday, October 6 at 6 p.m. when they travel to Salem, Massachusetts to face off against Salem State University. 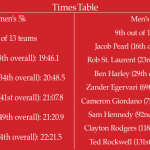