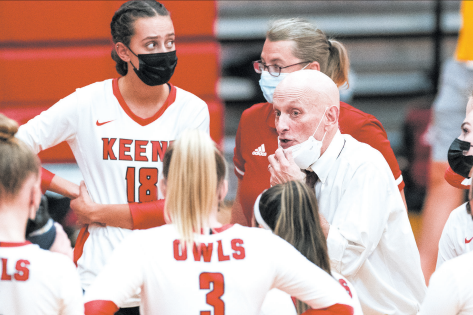 Women’s volleyball coach Bob Weiner talking to the team during a huddle in the Spaulding Gymnasium.

The Keene State volleyball team lost to New England College Thursday night in their first game ever against the team.

The Owls started off strong, only giving up two of the first seven points. This lead would not last long however, when NEC (New England College) went on a nice run, scoring eight points. Keene State ended up tying the game at 17 after a pair of kills by Sydney Johnson and a kill by Kacie Blanchet. Elizabeth and Sydney Johnson put up a block and Cassidy Samuleson put a spike on the board, bringing the score to 24-20. Although they only needed one point to win the set, NEC scored six consecutive points on the Owls, three kills, one ace, a block and an error from Keene State.

The second set started out similar to the first with Keene State leading at the beginning 7-1. Eventually, the Owls were leading 13-8 at one point, but the lead did not last long. NEC managed to take the next six points, putting them ahead by one. Two errors and an ace allowed New England to lead 20-16 not long after. The Owls did attempt to make a comeback with a score of 22-21, but a pair of mistakes and a kill allowed the Pilgrims to take the set. 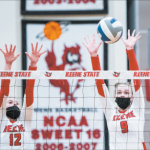