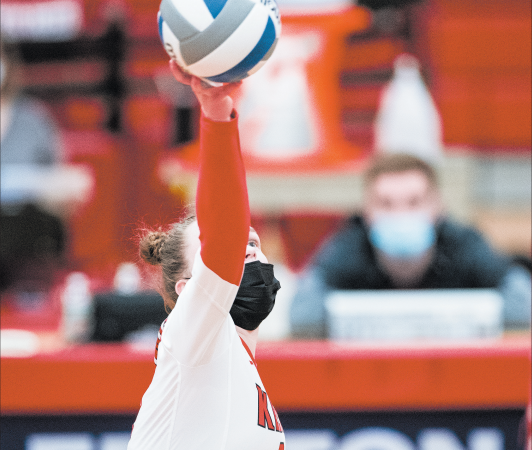 Senior middle blocker #9, Emilyann Ashford, hitting the ball at a home game against Rivier on September 14.

Keene State College volleyball senior and middle blocker, Emilyann Ashford has been playing volleyball since she was in high school. She was a very well rounded athlete, playing soccer, volleyball, tennis and running track throughout her high school career. She decided to stick to volleyball, however, when choosing which sport to focus on in college because she knew that she wanted to be a collegiate level athlete. Compared to her other sports, Ashford believes that volleyball is the most difficult due to the team aspect.

“I think ultimately I chose it because I thought it would be more of a challenge because it’s not just an individual sport. It depends on everyone on the team. The other sports I was in were team sports technically, but I feel like very few sports actually get to the point of teamwork that volleyball does because one person can be performing very well, but if the other person isn’t doing their job or is having a bad day, then it’s going to affect the entire game,” Ashford said. Playing many sports in high school had helped Ashford during her time here at Keene State. Bob Weiner, the volleyball head coach, had positive things to say about Ashford’s athletic and academic career.

Ashford believes that volleyball has had a huge impact on her college experience, allowing her to become more social than she would be otherwise. “I think it’s definitely helped on a social aspect. The team has always been there for me when I needed it, and it’s always great, just like– a great time on the court. We’re always laughing even at practice like we take things very seriously, but it’s a very happy environment,” Ashford said.

Liz Johnson, also a senior middle blocker, gave her view on what it’s been like playing with Ashford for the last four years. “I think she has just like such athletic ability, and she’s pretty much unlike any middle I’ve played with before and I think she just drives everybody to be better. We’re lucky that we have her in practice challenging us everyday ‘cause she’s one of the best middles in the conference for sure. So she just makes everybody around her better just by being in the gym,” Johnson said.

Ashford has big goals for her final season at Keene State, aiming to increase her blocks per set. Ashford believes that getting up her blocks, even a little, shows growth. She says that even though she is a senior, she can still show growth and continue to be a better player. On the other hand, Weiner has huge goals for Ashford too, wanting her to be a first team all-conference player.

Although Ashford is not a captain this season, she still has stepped up and helped be a leader to the other girls on the team. According to Weiner, Ashford has been very verbal at practices and makes terrific points to help the other girls. Weiner says that she is a leader without even being a captain and that’s important because she shows that leadership comes from everyone on the team who is respected.

Johnson explained that being the same year and position as Ashford does not lead to competition between the two. However, Johnson said that Ashford does push her and the rest of the team to do better and work harder every day. “She definitely does push me to do different things and like we wanna when we’re against each other. In practice, we want to beat each other, obviously, but like we’re still going to be friends at the end of the day, it’s like friendly competition always,” Johnson said.

Ashford said she is sad that this is her last season playing volleyball at Keene State and says that her time at the school has gone way too fast. She is however, confident in herself and her teammates to have a successful season and be a tough team to beat.

“I think we’re a really good team and I think we have so much potential and we’ve shown, in so many games, our resilience. Even in the game yesterday we were down by a good amount and we worked ourselves back up. We still lost that set, but then we still kept pushing on in the following sets and we still won the game, and that’s been shown in multiple other games as well,” Ashford said.

Both Weiner and Johnson had nothing but positive things to say about the graduating senior.

“She’s just the best. She’s the best teammate; one of my best friends. She would drop anything for anyone and she’s just awesome,” Johnson said.

“Well, the only other thing I can add is she’s been a pleasure to coach and to have on a team in every way that a coach can feel that way,” said Weiner.

Ashford has plans to get her PHD in cancer biology and work on producing a novel. She would also love to coach elementary, middle or high school volleyball players on the side after she’s solidified her career.