A new film from Haitian journalist Etant Dupain called “Madan Sara,” depicts the informal status of women in Haitian society and their importance to that society and how it functions.

The women, known as the Madan Sara in Haiti, deliver goods throughout the country and sell their goods in public marketplaces to support their families. The film focuses on the lives of Haitian women who are ordinary, but extraordinary. In the film, Haitian economist Camille Charlmers said, “A Madan Sara is a person who specializes in commerce; they are pillars of the Haitian economy.”

However, it’s dangerous work. This is because they are subject to being robbed, there is disruption on the streets including other deadly dangers. They are barely protected by the authorities. The film depicted the government’s lack of support as a form of structural violence that’s led to widespread harm.

“Haiti’s central government completely ignores the Madan Sara industry,” said a Haitian man in the film. “There are hundreds of thousands of women who are engaged in these daily practices, yet the government has done absolutely nothing to encourage, protect and support these women, or to give them any form of insurance to provide a social safety net.”

Dupain profiled a particular group of women whose work is at the center of Haiti’s economy, the Madan Sara. One of the Madan Saras said, “Madan Saras embody the value of the Hatian woman because they work hard, they travel everywhere. They are the ones who transport goods from city to city to provide for society. If the Madan Sara didn’t take the risky trip into the countryside to bring produce back to the city, we wouldn’t have any vegetables to eat.”

According to Street Team Productions, the film is out and its premiere was held in Haiti on October 25, 2020. It is not out officially via streaming or in theaters due to COVID-19. The team is only screening it for different organizations and institutions around the world at this time. Find out more about the film at madansarafilm.com. 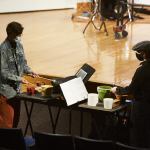