Spittin’ Chiclets is ‘the hockey podcast’

The world of podcasts has exploded in recent years. A new industry that has spawned new personalities has also brought hockey personalities to the forefront.

The podcast itself started back in 2016 with RA and Ryan Whitney. The start of the show was RA pretty much interviewing Ryan Whitney about his time in the NHL and it found moderate success. However, the show really picked up steam when the duo brought in former NHL enforcer Paul Bissonette. After the acquisition of Bissonette the show started bringing in current and former NHL players and television personalities. These interviews have spawned iconic moments and phrases such as “SONK” and insight that no other hockey show has been able to accomplish. These moments are born naturally from the banter between the hosts and guests on the show.

Since two out of the three Chiclet members played in the NHL more of the time their path has crossed with the guests each week. For instance, Jack Eichel, the current Buffalo Sabres superstar, came on the show and told a story about him messing with a teammate on an icy road before a game and slipped off the road a bit and got his car stuck. Eventually the two Sabres players were helped by a massive Buffalo Sabres fan. The fan assisted the players in getting to the rink, and in return was gifted tickets to a future game.

Stories about travel mishaps are just the beginning. There are stories of party moments, what playing in a bubble environment was like for NHL players and IIHF junior teams and a glimpse behind the scenes of some of the greatest hockey players to lace up the skates. For instance, while the juniors world championship was going on the Chiclets podcast had Kirby Dach on who was a first round draft pick and captain for team Canada. This went hand-in-hand with the podcast, because Whitney and Bissonette were chirping (talking trash) to each other, because Bissonette is from the Great White North while Whitney is from the U.S. While Dach was on the podcast the Chiclets team peppered him with questions about the bubble conditions for the tournament while cracking jokes about how the players spend their free time. The quality of the questions are also top notch.

The interview style of the podcast truly just feels like a conversation between three or four friends who are catching up about the game they love and their personal lives which is where the chemistry lies just like a hockey team. Each episode follows a similar structure where the three hosts catch up on their week, after the opening segment they jump into news around the NHL and hockey in general. These topics can range from hockey games of the past week to Ryan Whitney getting into the wrong car by accident and getting caught by the owner of said car. After their banter the trio sends the show over to the pre-recorded interview of the episode. I find this show structure is a friendly way to listen for the viewer, because the opening banter sets the tone of the show so by the time the interview is run the audience is engaged with the personalities. However, the crown achievement for the show is the launch of their own drink with New Amsterdam Vodka: Pink Whitney.

The show’s host Ryan Whitney is the namesake of the drink as well as the creator. While in the NHL he would mix the drink on his own, but as the Spittin’ Chiclets show got bigger the story of Pink Whitney did too. This all came to a fever pitch when New Amsterdam Vodka partnered with the show and Barstool to make the Pink Whitney drink a consumer bottle. The popularity of this drink cannot be overstated. Since the launch of Pink Whitney it has become an instant college classic as well as the flagship drink of the National Hockey League. If I had to sum up this show it would go a little something like this.

Spittin’ Chiclets is the hockey podcast. There are no hockey podcasts that come close to the content talked about on the show or the relatability that Whitney and Bissonette have with their guests. These are interviews that you would never see on ESPN or Sportscenter, and in the best way. The interviews talk about interactions with Police, moments when players truly felt like a rookie in the NHL. It will also be hard to find someone as irreplaceable as RA on the podcast, he brings the knowledge and energy of a Boston Sports writer that has crashed more Stanley Cup parties than he could count. This show has evolved past what any of the creator’s thought it would be and has no signs of slowing down.

The Spittin’ Chiclets podcast can be found on Spotify, Apple Music and YouTube. 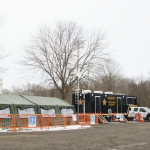