BodyWorks student manager Luci Calvi took what could have been a serious setback in her life and turned it into new opportunities.

Calvi is an exercise science major and senior at Keene State College. Unlike many of her colleagues at BodyWorks, it wasn’t a passion for sports or exercise that led Calvi to the major. She began her fitness journey as a ballet dancer, practicing for over a decade before coming to college.

“I did ballet, like strictly religiously from like five [years old] until I graduated high school,” Calvi said. “And after I stopped dancing, I wanted to stay active but I needed to find a way that was, you know, interesting to me and a little bit healthier for me than I was while I was dancing.”

Originally, Calvi had plans to continue dancing, however, an injury that caused her to have surgery on her foot ended up changing her plans for the future.

“It kind of stopped me dead in my tracks from dancing and going forward with dancing, so I was kind of forced to shift my life path, basically,” Calvi explained. “Then, while I was recovering from my surgery, I was in physical therapy and so I was kind of like, ‘Hey I think I would actually really like to do this as a job,’ so I was looking into physical therapy and through that I found exercise science.”

Calvi also solidified her career goals by completing an internship a few years ago at a physical therapy clinic. She mentioned that it was the experience of seeing people progress and knowing she was a part of that success that made her want to go into the field of physical therapy.

One patient really stood out and inspired her to continue with her work in the field.

“This one woman who was there. She had shoulder surgery and, when I first got there, I mean, she could barely just move her wrist,” Calvi explained. “By the time I left, she was able to put her arm above her head and it was just the most rewarding thing to watch her come week after week and do a little bit more movement and kind of grow a little bit. It was cool to hear her say like, ‘Oh I can put stuff back into the cabinet now by myself.’ It was just [a] really nice experience to watch that.”

While this was a pivotal moment in Calvi’s decision to pursue physical therapy, it was the positive experience in the exercise science practicum class that brought her to BodyWorks and, eventually, to being one of the student managers. She now works alongside BodyWorks Manager Charity Sweeney as well as the other student managers Jen Mutaszewski and Andrea Lynch as a mentor to the practicum students.

“I feel like Charity is a great manager, or boss, to have. She’s super nice,” Calvi said. “I’ve just had a really positive experience overall. I know I’m comfortable with everybody because we’re all exercise science majors so we all kind of know each other coming into it, which is really nice. It kind of feels like, you know, it doesn’t really feel like work when you’re around people you enjoy, doing something that you enjoy.”

BodyWorks has also given Calvi the opportunity to combine her love of dancing with her major and passion for fitness.

“I teach a group fitness class now and it’s called Fit Barre,” Calvi said. “So, I kind of take ballet barre experiences that I’ve had, and I combine them with resistance training. I kind of blended the two of them together and I made a Group Fit[ness] class out of it, which is new this semester. It’s a brand new class so it’s something that I really care about from both ends and just kind of mash them into one.”

After Calvi realized she wouldn’t be able to continue dancing, she started looking for other outlets and that was what brought her to fitness.

Now, she uses strength training to make and maintain a connection to her past experiences, but also to grow.

“Resistance training is like my go-to, just because I feel like it makes me feel strong when I do it and, going from being a ballerina and being dainty and tiny and pretty, now [I’m] feeling strong and healthy,” Calvi added. “It’s a different dynamic for me but I really enjoy it.”

Calvi will be taking the next step in her career after commencement in May by starting a physical therapy program at Franklin Pierce in August to continue adding to her knowledge and experience.

“I’ll be getting to apply what I’m learning now at BodyWorks and what I’ve accumulated from watching physical therapy and being in physical therapy and put that into how I’m going to do it for my patients,” Calvi said. “I feel like that’s the enjoyable part about it. Taking the information that you’re given and that you learn and kind of twisting it to make it your own; finding what works best for you and, like, finding your niche.”

Calvi and the other students at BodyWorks are still looking for personal training clients for the Spring 2021 semester. The cost of personal training is $50 a semester, however, Group Fit classes are no additional cost to students. Calvi teaches Fit Barre on Thursdays from 4:30 p.m. to 5:15 p.m. The rest of the Group Fit schedule can be found on their Instagram page @kscbodyworks.

The Owls who stayed in the nest: a look at alumni in... Previous
Owls dominate doubleheader against Norwich Next 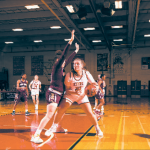