The Modern Escalation of Violence

Violence and hate have, unfortunately, been common in our country ever since its founding a few centuries ago. Some of the times when violence has peaked has been during extreme periods of civil and political unrest. I would think that right now in our country is an extreme time of unrest for everyone.

With the coronavirus entering its 11-month mark, as COVID was first found in the United States in late January, the extreme distrust of politicians, as well as a wild election season. People of the United States are just angry and want things to change. But unfortunately, things like a pandemic and already elected politicians, do not change overnight, and because of this Americans are facing a time of unrest.

I was watching a seminar over Zoom a few weeks ago that was put on by the Bard Center Study of Hate. The speaker, Keene State’s very own Dr. Jim Waller was speaking to this subject on hate and risks of violence in America. Waller is Keene State’s Cohen Professor of Holocaust and Genocide Studies. One thing he had said that really resonated with me was that the pandemic is making people narcissistic. I had sat with that for an hour or so and really let it resonate and thought about it. He is right, and I think that this is one of the many reasons for this civil unrest we face. Most people are putting themselves first in this pandemic and shutting out anyone they can see as a threat. With the nature of COVID-19, it makes sense to be putting your safety first and not wanting to catch the virus; this is not inherently selfish in my opinion but the extremes to which we have taken it are making us ruthless to one another. People are boiling others down to just the numbers of cases each state has had, not looking at smaller communities or even personal habits when it comes to safety. There are people I know who feel this narcissism towards others so greatly that they are turning into elitists. They think they are so much better than everyone else because they wear their mask and stay inside, which are things most people do already. This unrest and fostering these ideals are growing in our communities at such a rapid rate that soon people will only be how the pandemic treated them.

The election also led to these ideas and increased people’s ideas of narcissism as well. There are many factors at play, but the continuation of narcissism based on how you voted is real too and something I think should be studied further. Essentially what I am getting at is that people who vote a certain way or vote for a certain candidate think that they are better than others because of who they support. I do not think one party or group of voters feels this way more over the other, but people see what they believe and what they stand for as what is right and therefore everyone else wrong. Especially, those who fall into the political extremes feel more narcissistic about their votes than others and it is obvious. My sister is more of an independent with more left views so she and I do not particularly think on the same page all the time, but she does not see herself as better than anyone else because of it, and if she did, it isn’t obvious. On the other side, I know a lot of communists who have extreme leftist ideas, and I know very well, and it is extremely obvious they think they are better than the rest of us; and the extreme right thinks the same way, it is just obvious. I think that this narcissism is fueling hatred towards others and people want to be in the right so bad that many are frustrated and angry and hate others because of it.

I think the United States will face mass violence soon. If people feel the need to continue to hate and belittle the others in our society things will only escalate even more. To bring Dr. Waller back into my narrative, in a class with him he had taught us about “othering” and that is separating people and categorizing them due to their identities, particularly those identities that are different than yours, this is usually a factor that plays into mass atrocity and wide scale violence. I think on some scale that is what we are doing right now and considering the course of our country I believe this will only grow.

This article is the sole opinion of Lydia Mardin. 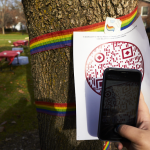 Rainbows on Fiske Quad Previous
A Painful Plea For All Next