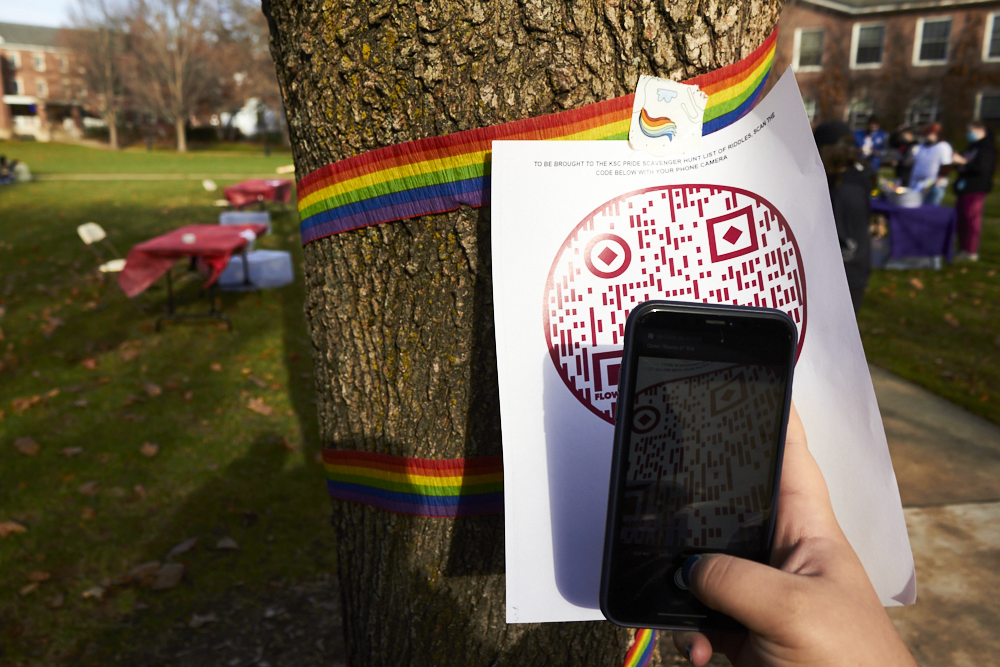 Dozens of rainbows could be seen on Fiske Quad on Saturday, November 21 at KSC Pride’s lawn fair.

The lawn fair was set up from 11 a.m. to 4 p.m. and featured a wide variety of tables and activities. Monadnock Center for Violence Prevention (MCVP) and The Public Health Club both had tables and music was provided by WKNH.

The Event Coordinator for KSC Pride Hannah Brewer said the club had also set up activities at tables all over the quad for students to check out.

“We have a lot of tables. A lot of different types, you know. There’s a lot of different kinds of people in the community so to appeal to all of them you have to have a variety,” said Brewer. “We have cornhole, bracelet making, keychain making, button making, chalk art, food, because who doesn’t like food. And most importantly, we have our scavenger hunt.”

The idea for the scavenger actually came about last year between the former president of the club and current President of KSC Pride Gretchen Moore.

“Actually, last year, before all of us went home in March, the previous president Lucas (Mendelsohn) and I, we wanted to do something,” said Moore. “We thought a scavenger hunt would be really cool, but obviously it all kind of turned to crap before we were able to implement it. But I really wanted it to happen this year and especially because of COVID. Anything outside and with people moving far away from each other would be ideal so I was like, ‘This is perfect, we can do it now.’”

Attendees were able to scan a QR code on their phones and then they would receive the clues for the places they needed to go on the scavenger hunt. They first had to solve riddles before they could find the next location.

Brewer said that the scavenger hunt was a great way to get the KSC community together in a COVID-friendly way.

“I mean, you can’t do it by yourself. There’s no way you are doing the entire scavenger hunt by yourself. You are going to need to ask other people for help and that’s definitely going to start conversations between people who probably wouldn’t talk normally,” said Brewer.

“A scavenger hunt will bring people to places that they haven’t been before or maybe places they can visit again if they need more resources,” said Moore.

The event also gave students one last chance to be around their peers before they departed for winter break on Wednesday, November 25. However, for students like Brewer, who would be staying on campus, it was their last chance to see it so full of life until the spring semester begins.

“We understand that a lot of people can’t go home so when debating the time and date we decided this can be something special for people like me. I am staying on campus over winter break,” said Brewer. “This will be the last time that I am around a lot of people in one place.”

You can visit KSC Pride on Facebook at @KSCPride or visit their office in the L.P. Young Student Center, room 242.

Meeghan Somerset can be contacted at:

Alternative Break is cancelled for now, but will find... Previous
The Modern Escalation of Violence Next