There was one epidemic in history that was deadlier than the COVID-19 pandemic: Smallpox.

History professor at Keene State College Dr. Gregory Knouff  presented his lecture called “Weathering the Smallpox Storm – A Past Pandemic With Lessons for Today” on Tuesday, November 17. The lecture was the inspiration for an entire series of lectures called “A Three Seminar Mini-Series: Outbreak! Our Complex Relationship With Infectious Disease Past and Present”.

“The idea originated from the class interest and the smallpox talk. It seemed like if a group of students from different majors were interested in the topic, that meant the community would be interested and that we should make sure we were sharing some of these stories in a broader way,” said Launen.

From there, Launen thought Dr. Rennix would be the best person to teach epidemiology to her class and they decided to add that topic to the seminar series as well, thus growing the single lecture to a mini-series.

Launen said that one of the main things they wanted was for the lecture series to be positive and a reminder of how epidemiology gets us through infectious diseases.

“It’s good to remember that we’ve gone through pandemics before and made it out the other side,” said Launen. “Like the 1918 one, right? I mean it sucked, but we are not enduring something the world has not endured before. We are enduring something the world has endured plenty of times and they made it through; we can too. I just think it’s good to remember that other people had the grit to make it through and we can too.”

Knouff’s lecture in particular focuses on the historical effects of smallpox on the Americans, however, many comparisons arose concerning the COVID-19 pandemic.

“Imagine what we are experiencing now times 30,” said Knouff. “A group of people who have not been in contact with smallpox that (30 percent) would have been the mortality rate.”

“As we now know, we are living through one,” said Knouff.

While the comparisons to the COVID-19 pandemic made the lecture relevant to today’s world, the biggest takeaway that Knouff wanted the attendees to understand is that smallpox epidemics slowly wiped out natives in the Americans; it was not a quick epidemic. There were multiple outbreaks in densely packed areas of the country.

“What I want to be really clear about, a lot of people have a sense that in 1500 to 1520 when Europeans and Africans began to arrive with these diseases, the disease spread all at once and natives all died and that’s the end of native history,” said Knouff. “That was emphatically not the case. The places where smallpox and other epidemics took their greatest tolls were in the most densely-populated, sedimentary and complex civilizations of the Americas.”

Meeghan Somerset can be contacted at: 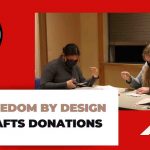 FREEDOM BY DESIGN CRAFTS DONATIONS FOR KEENE HOMELESS... Previous
This is where we draw the line Next