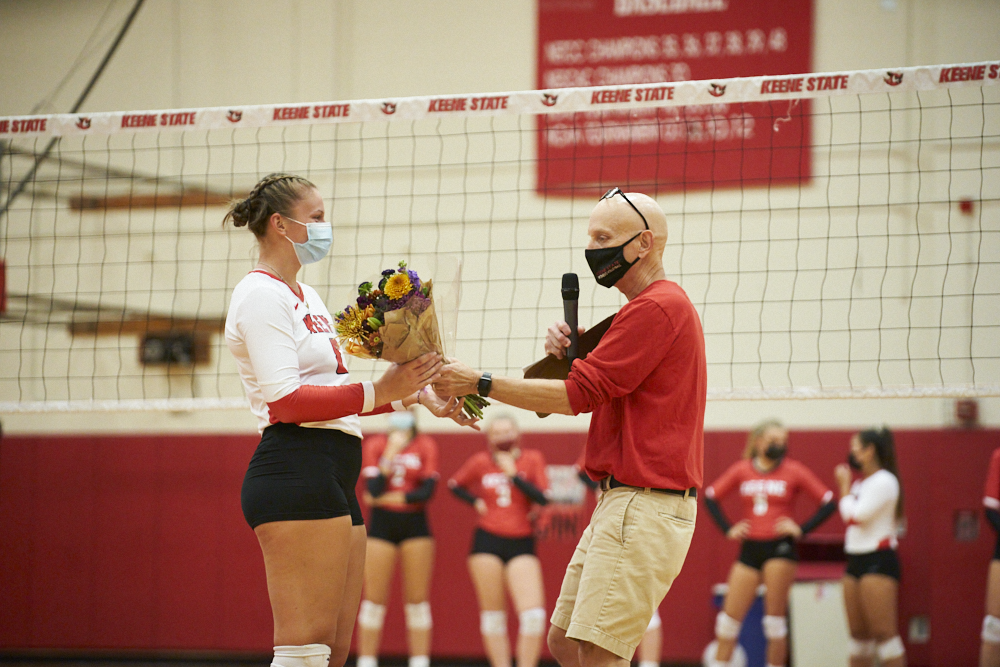 October 9 marked the second volleyball scrimmage of October, as well as the senior night celebration for the lone senior on the team, Megan Palmer.

The evening began with a speech given by Bob Weiner, head coach of the team, where he praised Megan for the care and success she brought to the team during her four years at Keene State.

“Had we played a normal season in 2020 I believe that Megan would’ve been the third player in Keene State history to finish her career with over 1,000 kills and 1,000 digs,” said Weiner in his speech to Palmer. “To achieve something like that you really have to be a special volleyball player and be able to do every single skill on a volleyball court. That’s Megan. But, that’s not all.”

Weiner continued on, praising Megan’s ability as a captain and leader on the team.

“She was named a captain after her sophomore season because of her leadership skills, hard work and determination,” said Weiner. “It seemed like an obvious choice… Megan is a perfect captain because she worries about everything. I didn’t really know that about her when we named her captain… but maybe the best captains are the ones who worry about the team the same way the coach worries about the team.”

The senior night ceremony was wrapped up with a personal video to Megan which showed her friends and family congratulating her for her four years of dedication and commitment to the team.

After the ceremony was completed, it was time for the scrimmage to begin.

Set one was dominated for the most part by the red squad, winning the set over the white squad by nine points.

The white squad would challenge red during the third set with a standout performance by Sydney Johnson, allowing the white squad to win the set. This win sent the scrimmage into the fourth set with the score being 2-1 in favor of red.

Volleyball will take to the court again in their final Red vs. White Intrasquad Scrimmage on October 30 at 6 p.m. in Spaulding Gymnasium. If you want to attend the scrimmage, you must be up-to-date on the Keene testing protocols and have the properly colored wrist band for that week. 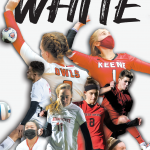 Red vs. White Previous
Stepping in when the goalie has to step out Next 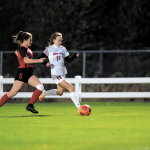