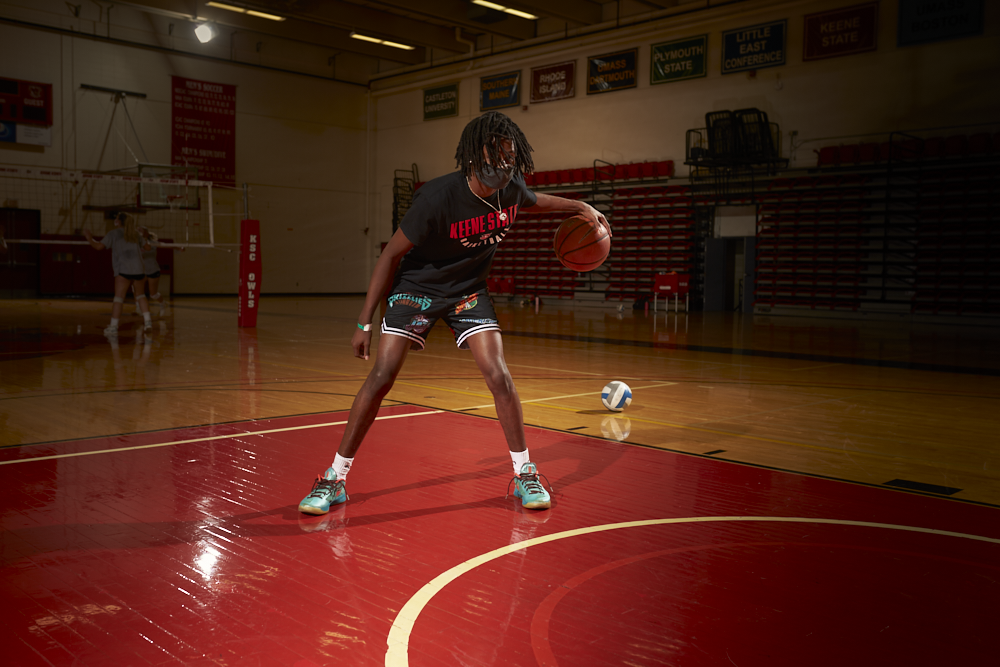 When it comes to recruiting new players for upcoming seasons, coaches at Keene State College will quite literally look all over the world for options. There are current KSC student-athletes who have lived in places such as Italy, Chile, the Democratic Republic of the Congo and more. However, none of them come from as far up north as the Owls men’s basketball team’s new recruit, Lyndon Prayer.

Originally from Anchorage, Alaska, Prayer has traveled across the United States the past two years playing for a handful of different National Association of Intercollegiate Athletics (NAIA) and Junior College (JUCO) basketball teams. This past year, Prayer played his sophomore season at Imperial Valley College (IVC) in California. Through his last five games there, Prayer averaged 23.8 points, 5.8 rebounds and 2.8 assists per game while shooting 37 percent from three-point territory. With two years of NCAA eligibility left, Prayer wanted a change of scenery again this year and received interest from Keene State’s men’s basketball coaches over the summer.

“My last five games at IVC was probably the best basketball I’ve played in my life, so I picked up a bunch of interest, all the way from low division one schools down to NAIA,” Prayer said. “I think Keene was the only D3 school that hit me up. Coach Mags (Nick Magyar), he saw me when I got retweeted by a JUCO advocate. He saw that and just direct messaged me. He basically said, ‘We got a spot for you, I see you doing really well on our team. We kind of need a scorer, a high-perimeter threat.’ So I ended up searching Keene up. I watched literally all of the men’s basketball games and film.”

“On social media there’s a lot of guys active, whether it’s services or people promoting players,” Cain said. “There was someone that reached out to us through social media with a couple names of potential transfers. I forwarded that information along to my assistants. Typically they watch the film of prospective student-athletes first and if they like guys they’ll kick it back to me and say, ‘We like this guy, we’re going to reach out coach, just wanted to keep you in the loop.’ So that’s pretty much how it happened with Lyndon. There was someone that handles those types of transfers that sent it to me.”

“My assistants watched some videos, thought he was pretty good.” explained Cain. “So they started a conversation with him after watching those videos. My assistants did a great job. They were a point of contact for Lyndon for the majority of his recruitment, specifically Coach [Dawson] Dickson and Coach Magyar.”

Although Prayer had interest from basketball teams at other schools, he said there were a few things about Keene State and the Owls men’s basketball team that ultimately made them his final choice.

“The first thing that attracted me to Keene was the environment; there’s a lot of support around here, I could tell,” Prayer said. “This is a small town and obviously they support their basketball team, so I kind of gravitated to it. The second thing was I’ve never been on the east coast. I feel like I could bring a west coast basketball type of presence to Keene, I feel like that would be attractive. The third reason was Mags made me feel super comfortable, so has [Coach] Cain. [Coach] Hastings is super funny. At first I kind of hesitated, I was like, ‘It’s D3, I’m just going to wait until I get a scholarship,’ and it just never came around. And during that time they were all still showing a lot of love, so I thought, ‘You know what? I might have to go to this school.’”

Now that Prayer is at Keene State and ready to play basketball in the spring semester, both Coach Cain and Prayer’s teammates are excited to see what he will be able to do on the court.

“I think the easiest way to describe him as a player is a shooter,” Cain said. “He’s a guy that can really shoot the ball. He can shoot it from really anywhere, almost to over half court. So he’s got tremendous range. He seems to be pretty consistent. Obviously coming here and playing here is different than other places that he’s been, so it’ll be interesting to see how he shoots it against the competition at our level, how he plays in practice and all that stuff. I’m sure he can handle the ball and make plays off the bounce as well, but if there’s one thing I’d say is a strength based off the film I’ve watched, it would be his shooting.”

“I haven’t played against him yet due to COVID-19, I have only seen him play in the gym,” said Mason Jean-Baptiste, a first-year guard who was also recruited by the men’s basketball team over the summer. “What I have seen is that he is a good shooter that has range to his game. This year I really think we can take over the Little East Conference (LEC) with the talent we have on the team.”

During his time in Keene so far, Prayer says he’s enjoying spending time on the east coast. However, there’s a lot of things he’s still getting used to, including New England slang, the change in time zones and even the difference in music on the east coast versus music on the west coast.

“I would definitely say I like it so far, it’s a great place to socialize I can tell,” Prayer said. “I like the school so far and meeting new people… The culture is definitely different… I’m still kind of adjusting. I’m getting used to slang, stuff like that. I’m still getting adjusted to the sleeping schedule because obviously it’s three hours ahead. The music is definitely different… Everybody here listens to New York Drill like Pop Smoke, and I’m not used to that at all. Nobody in Vegas listens to Pop Smoke heavy. We listen to west coast music like YG and Shoreline Mafia.”

Although he’s enjoying his time on the east coast, Prayer says his heart is still in his hometown of Anchorage, Alaska.

“Man, write this down, Anchorage, Alaska, is the most beautiful place in the world,” Prayer said. “It’s super green in the summer, we have the northern lights and stuff; I’ve seen those before. Summer is the most beautiful part, I would go there every summer if I could. It’s straight daylight basically in the summer. So imagine, it’ll be 3 a.m. and it’ll look like straight blue outside. It’s just so gorgeous.”

Now, with just a few months until basketball season is set to start, the kid from Anchorage has one main goal in mind: Bring the LEC championship back to Keene State.

“Obviously the goal is to win the conference championship,” Prayer said. “That’s the main goal, always. As soon as we start, I want to get the chemistry building. I feel it building already, but I want it to get to like, impeccable, untouchable type of chemistry, like you can’t break it. That’s what I feel like wins games.”

Practice for both the men’s and women’s basketball teams is set to begin October 1 with games planned to begin in the spring semester depending on the COVID-19 guidelines and restrictions at that time.

Golf Classic postponed Previous
Catching up with Cross Country Next