Intramurals and club sports expected to have a fall season

While there is a chance that there may not be any NCAA Division III sporting events happening on Keene State College’s campus this semester, that doesn’t mean Keene State will be without sports in the fall.

Despite the impact the COVID-19 pandemic has had on typical life at Keene State, intramural and club sports are still happening this fall semester and students are being encouraged to participate. Some of the intramural sports being offered include cornhole, badminton, volleyball, kickball, pickleball and basketball shooting challenges. Club sports being offered include Brazilian jiu-jitsu, men’s club soccer, men’s and women’s ice hockey, men’s and women’s rugby, ultimate frisbee, dancing, environmental outing, skiing, snowboarding and yoga. Sign-ups for all club sports, as well as intramural cornhole, badminton and sand volleyball are open right now with registration for intramural four versus four volleyball as well as kickball opening on September 22.

Lynne Andrews, the Director of Recreation at Keene State, said that although these sports are happening at KSC in the fall, there will be certain limitations and requirements students must follow in order to play.

“We will have intramurals and club sports, but with a lower number of participants and low contact sports that require a low amount of sharing equipment,” Andrews said. “Anyone who comes in has to have the most current [COVID-19] test color band. It’s not a lot, but these are things other schools don’t seem to be offering for fall.”

The Keene State College intramurals page on imleagues.com details more COVID-19 guidelines that will be in place for all Keene State intramural sports.

Club sports in particular have a strict return-to-play protocol similar to the one that the NCAA has set in place for division three teams to return.

“Club sports are allowed to have practices similar to student-athletes thanks to weekly testing,” Andrews said. “They start in small groups, pods of three, to keep socially distanced from the people they haven’t been interacting with, making sure they are gradually introduced to each other. Then they’ll expand to larger groups. In most situations, larger groups are what they need for actual practice or inner-squad scrimmages.”

Jiana Lotito, the President of the Ultimate Frisbee Club, expanded upon this, explaining that the final phase of their return-to-play plan will allow them to have inner-team scrimmages.

“In our first phase we can only have groups of three people participating at practice in a certain area and that will last for about two weeks,” Lotito said. “Then eventually we’ll get into more like ten people and then 15 people, which is when we’ll be able to hold scrimmages. We’re looking forward to that, but we have to get through the first two weeks of making sure nobody gets sick.”

Along with the return-to-play protocol in place for club sports, the athletics department has set practice guidelines to ensure the health and safety of every participant.

“They’ll have a practice sign in sheet where their  temperature is checked and they’ll be asked questions,” Andrews said. “If someone misses a week of COVID-19 testing, they wouldn’t be allowed to practice next week.”

Another major difference for club sports this year will be the absence of competition with outside schools. While intramural sports are typically played with Keene State students only, club sports compete against other schools just like the NCAA teams. But due to COVID-19, club sports will only be able to play games amongst themselves this fall.

“Club sports will have no competition, because most schools they play against aren’t traveling and playing games,” Andrews said. “Hopefully in the springtime things may open up, but in fall, travel and competition aren’t happening.”

“We definitely want to work towards full scrimmages with our team,” Lotito said. “I know towards the end of the last phase we are allowed to have about 15 people in one area at a time, but still socially distanced. But for ultimate we play seven on seven, so that number is perfect for us to be able to eventually have a real-style scrimmage at the end of the year.”

For club sports like rugby and ice hockey where there is usually physical contact with other people involved in gameplay, figuring out how to practice and play this semester has been even more challenging than that of the non-contact sports.

“This season is different, we are practicing in different phases right now, no contact,” said Joe Fletcher, a member of the men’s rugby club. “We have to do the whole practice in a mask which is tough because the first two weeks are conditioning. We have to work in groups of three and in two weeks it transitions to groups of ten. We don’t have a competitive season, so we are trying to set up scrimmages on Saturdays once we have followed the school guidelines.”

Furthermore, a challenge for intramurals and club sports teams each year is attracting interest and recruiting new players. Lotito said that even with the challenges COVID-19 has brought this new semester, her ultimate frisbee team has had no issue finding new talent thanks to efforts made by Keene State College, as well as a little bit of good luck.

“We had a non-contact involvement fair online,” Lotito said. “We filmed a 90 second video talking about our club and introducing the president, treasurers and any captains. There were other clubs like film society and greek life doing it too. One of the challenges this year is recruiting new players, but we had a lot of freshmen actually reach out to me through email saying, ‘Hey I play ultimate, I’m interested in joining.’ It was really awesome and encouraging to see so many new people still wanting to come out and play, even with all the craziness going on.”

Lotito’s Ultimate Frisbee Club began practice on Friday, September 18, while intramural cornhole and sand volleyball will be the first intramural sports to begin play with games set to take place on Saturday, October 3. 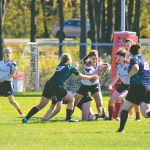 Different season, same drive Previous
THE FACES BEHIND THE CAMERAS Next 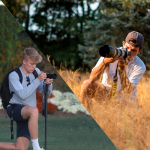