As Keene State College nears the end of the spring semester and classes begin to gravitate toward remote finals, extracurricular groups like Keene State’s only acapella group Chock Full O’ Notes (CFON) are hopeful for the future.

The recent move to remote learning has not been an easy one; students and teachers alike are both struggling with taking education into their own homes from states apart, but what about extracurriculars?

Intramural sports, literary clubs and musical ensembles have also been suspended during this time of separation and distancing, but the hope for a fresh start next semester is keeping the acapella singers of Chock Full O’ Notes hopeful.

Keene State senior Patrick Holden has been a member of CFON since his first semester at KSC in the fall of 2016 and is deeply saddened he cannot finish off his last semester with his friends and fellow musicians.

“I think I’m starting to come to peace with it all. It’s certainly not how I, or anyone else, wanted this year to end. However, I’m finding joy in the things that matter right now and have refused to let this shutdown stop me from keeping in touch with those I care about—especially CFON,” said Holden.

Holden elaborated on how CFON continues to keep in touch with music and said that they made a TikTok account for the acapella group for fun that is available to view on their Facebook page.

Chock Full O’ Notes has remained in touch from their own respective homes and has been working out ways to keep members involved, active and smiling through their social media platforms and game night calls, according to Holden.

Gillian Shannon, a senior at Keene State, has been a member of CFON for three years and has been the active president of the group for one year. She expressed her sadness for her group as they had to cancel their trips to invitationals and concerts alike, especially considering this was her last year.

“I was really sad to lose my final spring concert with this group. Especially because of how incredible our set list was,” said Shannon.

Shannon went on to explain that while it is hard to make exact plans for the future, she imagines that the top priority for CFON will be holding auditions in the fall semester.

Keene State College senior, student teacher and four-year veteran of CFON Christian Terry said that being a music major now is all about being social and remaining in close contact with other musicians.

“To the staff, I want to tell them they are being very innovative and trying new things. I appreciate it. Music is needed and necessary at this time,” said Terry.

Chock Full O’ Notes’ advisor, Dr. Carberg was on sabbatical at the time of this article being written and was unable to be reached for a comment on the state of the group and their plans for the future.

The rest of Chock Full O’ Notes had similar things to say to music students and staff alike, with hopeful and heartfelt wishes for good health and good music to get us all through this challenging time.

Chock Full O’ Notes can be found on Facebook at Chock Full O’ Notes and on Instagram @chockfullonotesksc. Check those pages for notes from the singers and for updates on the group as they begin planning for the coming fall semester.

Alex Dube can be contacted at 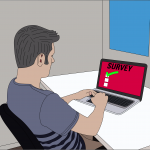