With the cancellation of all remaining theater and dance performances at Keene State College, the dance department had to cancel the rest of their season, along with other events they were supposed to attend.

Dance Department Head and theatre and dance Professor Cynthia McLaughlin said, “We heard that our season would be canceled when the Redfern canceled their season. I had just canceled all rehearsals for after spring break, as it seemed only too obvious that it would not be wise or even possible to be in close contact.”

Although some music department performances will be held via livestream, this option did not seem to be the case for the dance department. “There were no alternatives proposed by the Redfern, however, I am sure they would have been open to any discussion. This has been brand new territory to navigate for all of us. In order to honor this moment, I am in the process of putting together a video of alumni, students, staff, faculty, guest artists and community members responding to a prompt through movement. We will be broadcasting a date and time for a live webinar soon,” said McLaughlin.

The cancellation also affects the dance department seniors specifically, as this would have been their final season as dancers at Keene State.

Cassandra O’Keefe, a senior in the dance department, described the process of how the rest of the season was canceled. “The bad news came in waves. At first, our dance conference we were attending happening in Vermont was canceled, but Keene State had not closed yet. Then it was that we would keep having rehearsals during the two weeks that we were taking classes online. And then after the video was sent out from our president saying that we would not be returning to campus at all, I knew that Evening of Dance was not going to happen this spring. All participants in Evening of Dance received an email shortly after saying it was officially canceled,” said O’Keefe.

O’Keefe also choreographed a piece for Evening of Dance. “I was choreographing a piece titled ‘The Dinner Party’ that I had originally started working on in the fall and was continuing this spring. The piece was based on seven iconic, feminist women from the past and present coming together to have a dinner party. I was devastated when I knew that I would not see my piece come alive on the stage,” said O’Keefe.

O’Keefe said the cancellation impacted her greatly. “I was sad for my seven dancers who worked so hard for four hours every week in rehearsals for my piece. We poured our hearts into the piece. I was also a dancer in the show, having multiple four-hour rehearsals myself during the week. But I knew that what we had already created and the experiences we had shared in the space together were so valuable, and I will cherish those experiences forever.”

The dance department was also supposed to attend the American College Dance Conference (ACDA). Dance senior Brooke Meehan said of the cancellation of the conference, “Keene State College attends the New England regional conference every spring semester. Schools from all over New England come together to perform, take classes and share the love of dance. Two works from choreography showcase, a production put on by the dance department members in the fall, are chosen to go to Evening of Dance as well as represent Keene at ACDA. These dances are performed and the choreographers are given anonymous feedback. ACDA is such an important experience because it’s a way to connect with dancers outside of Keene, perform for people outside the community and represent Keene State’s dance department.”

The dance seniors’ final season may have come to a close, but, as McLaughlin said, that does not take away from the hard work the seniors have put in. “I would like to add that I am so incredibly proud of our students, especially our seniors. Many of these students spent the entire semester rehearsing 16 plus hours a week. They dedicated themselves to the grueling (both physically and mentally) process of being the raw material for an originally devised and choreographed work… We create, we throw away, we change and change and change again and all the while the students remember. They were naturally heartbroken to hear that Evening of Dance would not happen this spring. However, they continued to find ways to support one another and to remain hopeful and grateful. I have been so honored to work with them all,” McLaughlin said. 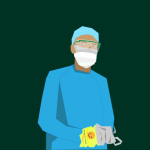