COVID-19’S IMPACT ON THE MOVIE INDUSTRY

As the world finds itself affected by the coronavirus pandemic, industries all around the world find themselves impacted by the implications of a worldwide quarantine. Among these includes the film industry, as both productions and theatrical releases come to a halt. With large gatherings forbidden, all movie theaters across the country have closed down—in most countries throughout the world. This includes the two biggest box offices on the planet, the U.S. and China.

Though the fate of some of these films is secured with a new date, such as “Fast and Furious 9” being pushed back a year to April 2, 2021, many are left uncertain about their futures. Anticipated blockbusters “Mulan” and “Black Widow” from Disney have no official release date. Rumors of Warner Bros.’ “Wonder Woman 1984” going to streaming services have floated around entertainment news outlets, but as of now, a new release date of August 14 is set.

The effect of these delayed film releases is a domino one as studios push back films and give them later time slots that had previously been set aside for later films. This consequently pushes back a whole string of releases, as well as impacts marketing strategies. For example, horror or Halloween films coming out in October for the holiday, Christmas films coming out in December and Easter film “Peter Rabbit 2: The Runaway,” which will no longer be able to come out on April 3 for the holiday. Upcoming films that released all of their trailers and finished their marketing will have to add money to their advertising budgets to fill the unexpected gap of time before the film releases.

With a backlog of films piling up, talk of sending certain films to streaming services such as Netflix, Hulu, Amazon Prime and Disney Plus has entered the conversation. Though many fans like the idea of the extra entertainment being provided while they are stuck at home, the idea represents a major financial loss for the studios without the money brought in from a theatrical release. This is especially true for Disney, which has thousands of “Mulan” and “Black Widow” fans subscribed to their streaming service Disney Plus and would be giving up an anticipated billion-dollar revenue from theaters.

Further, COVID-19 has also halted production on many films including the new Batman movie starring Robert Pattinson, “Mission: Impossible” and Disney’s live-action “The Little Mermaid,” as well as many television shows. Sports events, Broadway shows, press tours and conventions have been canceled. Late-night talk show television has been brought to the hosts’ homes, filming without an audience.

In the face of a pandemic, the entertainment industry has been thrown into upheaval like never before in history, posed to lose millions upon millions of dollars on all ends. The only thing audiences, and all involved in the films, can do now is wait. 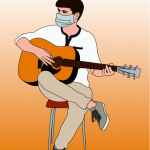 THE ARTS IN THE FACE OF CORONAVIRUS Previous
CATEGORY IS...ROBBERY Next

COVID-19’S IMPACT ON THE MOVIE INDUSTRY