After four long years of work, Tyler Martin performed his senior recital in order to fulfill the requirements of the music performance major in the Alumni Recital Hall on Sunday, March 1, at 3 p.m.

His repertoire included: “Comfort Ye” and “Every Valley” from “The Messiah” by the composer George Frideric Handel, “Despite and Still” and “3 Songs, Op. 10” by Samuel Barber, “Nachtstuck” and “Der Erlkonig” composed by Franz Schubert, “The Schmuel Song” by Jason Robert Brown, “Vainement ma bien aimee” from “La roi d’Ys” by Edouard Lalo, “Poeme d’un jour” by Gabriel Faure, “The sorrows of death” from “Hymn of Praise” by Felix Mendelssohn and “Ideale” by Paolo Tosti.

Martin’s vocal teacher, Dr. Daniel Carberg, is on sabbatical so Professor Evangelia Leontis has been working with him since the start of the semester.,

“It was fun to work with Tyler this semester on his recital. He had done a lot of the work preparing this music with Dr. Carberg in the fall semester, so when I started working with him in January, he was fairly far along in his preparation,” Leontis said about working with Martin. “Our work has really focused on refining his foreign language diction in his German and French repertoire and finding more musical expression in all of his pieces.”

The majority of the music that was performed was not in English. This means that Martin was not only performing very difficult vocal technique but singing in languages that were not his own. This was extremely appealing to the audience members and a new cultural experience for many of them as well.

Sophomores Lex Woitowitz and Maddie Gubata are both music majors as well, but they are instrumentalists.

“We came just to support one of the seniors, but it is also interesting seeing a vocalist perform,” said Woitowitz. “Seeing the progress of the seniors reminds us where we are going to go by the time we are seniors.”

Along with the range of languages, there was also a range of intensity and demand within the music. Though she was not part of the process of choosing the music, when asked what was the most difficult piece that Martin would perform, Leotinis said, “I’m not sure what Tyler would cite as the most difficult piece, but I would guess that the set by Samuel Barber titled ‘Despite and Still’ is the most difficult to learn. The music is rhythmically, melodically and harmonically complex and the poetry is rather difficult to interpret as well. Tyler has put a lot of time into these songs and I think he will sing them very well.”

This particular song was incredibly moving to members of the audience. Gubata discussed what pieces were her favorite in the recital. “We both [Gubata and Woitowitz] really enjoyed the first piece from ‘The Messiah,’” she said. “My other favorite was ‘Despite and Still.’ It was very well done.”

This recital is one of the final requirements for music performance majors that concludes the students’ four years of hard work. While it is required, it is also something the students look forward to as they move through the major.

Keep an eye out for the rest of the recitals from senior music performance majors in the Student Recital Series as they continue throughout the spring semester.

Tyler Martin did not reply to request for comment.

Meeghan Somerset can be contacted at msomerset@kscequinoxcom 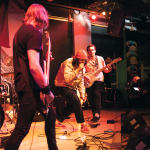 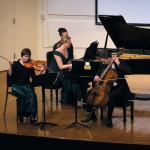