Keene State College Bookstore Manager Drew Nichols presented in front of the student assembly to give an insight on the bookstore contract renewal process. Nichols said that the provider will be chosen at the end of the month.

The finalist providers are Barnes & Noble and Follett Corporation. The student leaders shared their views and opinions on the current bookstore services and expressed what they would like to see in the future.

Director of Campus Life and Student Government Advisor Jen Ferrell said that they are looking for a student-athlete representative and residential assistant representative for the dining student advisory committee.

Ferrell talked about the preliminary cabinet meeting for the redesigning of the Student Center.

Student Body President Davis Bernstein encouraged the student leaders to get registered to vote for the primary elections.

He also announced that the Student Government elections will be on April 15. According to Bernstein, the petition will be sent out on March 30 through April 8. 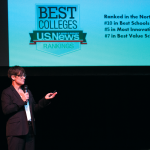