A robbery occurred in downtown Keene at the retail store Synergy on Tuesday, February 11. All Keene State College students received an email notice from campus safety regarding the incident, which suggested practicing additional caution around strangers on campus, securing vehicles, residential halls and buildings.

According to the Keene Sentinel, Joshua Drinnon, a 26-year-old Swanzey man, was taken into custody by Keene police around 3 p.m. that same day at the Keene Inn. Drinnon was also charged with a separate burglary of a Concord Road resident’s home. When the incident was made aware to the community, Keene High School maintained a secure campus and Keene City Hall locked their exterior doors while Main Street was being searched by Keene police.

The Keene Sentinel reported that anyone with additional information can call the Keene Police Department at (603) 357-9820 and ask to speak to Detective Andrew Lippincott, or submit tips anonymously at www.ci.keene.nh.us/departments/police/anonymous-crime-tips. Any suspicious persons on campus can be reported to KSC campus safety at (603) 358-2228. 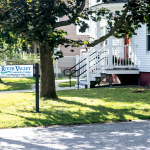