Owls who play in multiple sports throughout the school year

For some athletes, one sport to dedicate all their time to is enough. But what about the athletes who decide the “more the merrier” when it comes to their athletic careers?

Keene State junior Joe Nutting, is one of those athletes and he participates in both lacrosse and hockey at the school.

Nutting’s passion for hockey developed as early as four years old, all thanks to his dad. His love for lacrosse developed a few years later at age 11 due to his friends from school taking part in the sport.

Originally, Nutting chose to play lacrosse at The University of Massachusetts Lowell until he realized how much he missed playing hockey. After his realization, he decided to transfer to Keene State to better suit his potential to pursue both sports.

While playing two sports in general is tough, participating in two sports that have overlapping seasons makes it that much more difficult.

Nutting explained how his hockey schedule consists of two practices a week beginning at 6 a.m., while the third begins at 10:40 p.m.

“Now that [hockey and lacrosse] overlap, I have hockey in the morning and lacrosse in the afternoon. I’d say my body is pretty sore,” explained Nutting. “My legs hurt more often than not.”

Along with the physical stress that comes with playing two sports, some mental challenges coincide as well. While he usually finds a way to make it work, Joe’s grades do sometimes suffer, an issue his mother isn’t especially fond of. His main tip for finding a balance is to eliminate procrastination. He said, “work comes first, play comes second.”

As for mentality and preparation in a game sense, Nutting’s main focus for hockey is winning and he believes strongly in superstition. For lacrosse, he takes on a more relaxed approach, focusing more on development and the mind game that plays into the competition.

Musese’s love for soccer started at age five, while his fondness for track started around eighth grade. He recalls that the reason he actually started track was due to the fact that he was bored after the soccer season.

Musese decided to play sports in college mainly to keep himself out of trouble and to stay focused.

Though his passion for both sports is apparent, Musese has a stronger connection to soccer after playing it for so long. He has a laundry list of personal goals he is striving for in his soccer career and is constantly out working on them, while his track career goals are more focused on being able to picture it in his mind and follow through.

Pushing his body to reach those goals, however, has proven to be quite difficult for him. He tends to suffer quite a bit from injuries, including tendonitis in his ankles and an injured knee. That being said, it doesn’t seem to hold him back in any way. “I don’t let injuries put me down!” said Musese. He also doesn’t let words of doubt put him down, either. He expressed that his inability to reach some of his self-proclaimed goals and his “haters” have proven to be slight mental challenges, but he uses that as motivation to be better and do better.

Musese also said that it is not easy to maintain a balance between sports and school, but he emphasized that they should go hand in hand. For him, school comes first and sports come second, because if he doesn’t get the grade he won’t be able to play. His tip for Keene State students is to make sure to attend class and get work done before doing anything else.

Isabella Echavarria can be contacted

Keene’s women’s basketball make it into Little East... Previous
Competitors to coaches Next 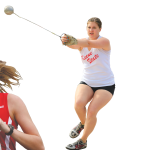