Keene State College gathered in the Alumni Center to celebrate local author Jim Rousmaniere and his book “Water Connections,” which details the push-and-pull relationship between humans and water.

The Sidore Lecture Series held its latest meeting on Tuesday, February 18, where Rousmaniere spoke about his recent book and how humans can take steps to help and preserve water in appreciation for what water has done and continues to do for them. “Water Connections” focuses on how bodies of water have been affected by changes in technology, economic values, pollution and consequences of human action.

After graduating from Harvard, Rousmaniere said he served in the Peace Corps in India, where he worked with and surveyed irrigation canals. It was in India where he said his interest in water really began to take hold. After his work in India, Rousmaniere began a 43-year career in journalism and was eventually named editor and president of the Keene Sentinel, from which he is now retired.

“In journalism, I did periodic cover stories about water, but I did not consider myself  an environmentalist. I always thought I was a journalist,” Rousmaniere said.

Rousmaniere obtained much of the research and information in his book from reading extensively about water as well as by talking to lots of different people and attending several conferences. He also added that he was thankful for technology and the internet, which made the process easier.

“The internet allowed me to access important documents online, which was not possible in the past due to limits on technology. I was able to learn new things every day and see new dimensions of the problem,” Rousmaniere said.

The Alumni Center not only hosted author Rousmaniere but also many audience members who had read his book and wished to voice their appreciation. One woman in the audience said she enjoyed reading about the different people and how they interacted with water.

“I found the book very interesting and appreciated the use of stories to reinforce the ideas and concepts about water and how it’s affected by humans,” the unnamed woman said.

Program Manager for Provost Kimberly Schmidl-Gagne said that when reading the book it’s almost like she’s speaking to Rousmaniere because “Water Connections” is written similarly to how he speaks. According to Schmidl-Gagne, she and Rousmaniere have known each other for more than 10 years.

Schmidl-Gagne said that the book is especially important now because of the climate crisis. Schmidl-Gagne also said that she thinks people take water for granted and underestimate its value as a natural resource.

“Water is plentiful, but the quality of the water comes into question because of pollution and that can have a huge impact on us,” Schmidl-Gagne said.

Rousmaniere added that humans need to be more responsible and conscious when they interact with the environment.

“Our problems with nature are becoming more acute,” Rousmaniere said. “We can’t engineer nature; we can only work with it as a partner.” 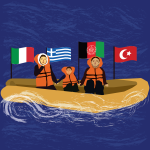 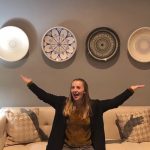