Students involved in Greek Life are encouraged to apply for Order of Omega, a Greek Honor Society at Keene State College, to demonstrate their leadership qualities.

“Being in the group, you really get a strong leadership opportunity,” said the treasurer of the club, Hannah Bower.

Order of Omega is a select group of students who are in Keene State fraternities or sororities.

These students must maintain a 3.2 grade point average and must be involved with the college and community.

Bower said being a member of an honors society can make a student stand out within a pile of resumes.

Not only would students be able to say they are a member of a fraternity or sorority, but they would also be able to show how they balanced that commitment with academic work.

“Being in Greek Life, we have so much going on all the time, and our grades are really important to us. Being able to balance activities and GPA really shows on a resume what you’re capable of doing,” said Bower.

Additionally, current advisor of the group Jennifer Ferrell said that being accepted into the group is an honor. “If someone is eligible, it shows that they have a high level of service to both the community and beyond,” said Ferrell.

Casey Lynch has been a member of Delta Phi Epsilon since her freshman year and she is now president of Order of Omega. She spoke about her initiation into the club and said she was eager to be accepted. “It was just so exciting to be accepted into the club and meeting everyone who was in it. It made me think about all that I’ve done to get into an honors society,” said Lynch.

Lynch also spoke about the Greek Graduation event the club puts on.

They hold it every year to honor the Greek graduates in all Keene sororities and fraternities.

Greek Graduation involves catering and giving gifts to the seniors as a parting gifts for their efforts.

Bower, a member of Phi Sigma Sigma, said that she and Lynch worked to throw Greek Graduation last year. “There was a lot that went into the event planning to make sure that the seniors were happy. We wanted to make it a good moment,” said Bower.

According to Bower and Lynch, the group is currently only accepting juniors and seniors, but they are reworking their process to allow second semester freshmen and sophomores to apply.

They can take in 15 members a year and are looking to add another four people at the end of this semester.

Applications require students to list their GPA, which sorority or fraternity they are a member of and their graduation year. There are also questions on community service, extracurriculars, scholarships or honors the applicant has received, what their qualifications are to be a member of an honors society and what they believe the three most important values are as a leader.

“It’s a really good opportunity and something that I’m glad to be a part of,” said Lynch.

Kiana Joler  can be contacted 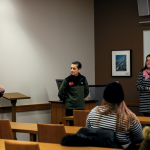 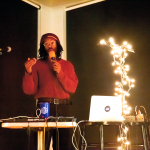