As you might have seen in the past week, we have had a handful of presidential candidates come to campus and the Keene area. Whether politics is your passion or not, these public figures chose to come here for a reason. New Hampshire is considered a very essential state to have for the election, and believe it or not the youth is the largest and strongest player in the decision making.

This is, without a doubt, the reason these politicians have decided to visit KSC and the community, maybe each two or three times. To them, your vote is extremely precious. But students and other young adults might not see their vote as meaningful.

There are always extremes on a college campus, if not in the nation itself. Some students are active representatives outside the Student Center, preparing students for the election and asking for signatures. There are also students who bash the campaigns and don’t have any ties to the political world. And then there are people who fall somewhere in the middle. To stand in line, listen to these candidates speak, and ask follow up questions is completely an individual’s choice. Although attendance is not mandatory, some could argue it’s an opportunity that shouldn’t be wasted.

One reason that these candidates should not be taken for granted is because very few schools have the opportunity to see the person that could very well become the next president of the U.S. This is a great opportunity and it is also completely free, which means that if you are a Keene State student who isn’t taking advantage of this, then you are simply not getting your absolute money’s worth.

On the other hand, The Equinox thinks that these candidates could be a bit more respectful of people’s time. We feel this way because in many cases there have been candidates arriving late, which leaves students questioning if it’s worth their time and when the event will actually start.

Another issue is the ridiculously long lines that each event has that leave students questioning if they’ll even get in to see the candidate. A solution to this could be lines that are only for KSC students since, after all, they are at our school and some of the money we pay goes toward setting up their visits.

Other than these two issues, The Equinox thinks that everybody should try their absolute hardest to see these candidates. This is because many people often can’t really get to know a candidate unless they hear them speak in person and say what they’re about. Once people go to see the candidates, they can figure out whose values align with their own and they’ll be able to make a much easier decision.

In the end, not only is it cool to say you have seen the possible president but they are the person that could be representing you for the next four years. If you ignore the opportunity, it could lead to regret as well as maybe missing out on a good story to tell.  These candidates are a great resource to learn about the issues facing our country and The Equinox believes an educated voter is a good voter. 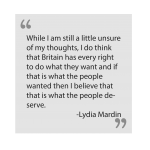