Warning: This article is not for children

Christmas is a fan favorite holiday for many reasons including gifts, family and giving back to others. The biggest part of it for children, however, is Santa Claus, an imaginary man who decides whether children have been naughty or nice and delivers presents based on his judgment.

While children love Santa, many people feel that it is wrong for parents to lie to their kids for a large portion of the beginning of their life. People often feel this way because they believe that it will cause the child to not know when the parents are telling the truth and lose their trust in adults in general. Some parents may also think, “Why give somebody else credit for the effort, time and money that I spend to make my child happy?”

Personally, I don’t have a problem with telling children about Santa and I actually believe that it enhances their experience of the holiday. I believe this because the idea of a magical entity who dedicates themselves to making this one day of the year as amazing as possible for children has always made the holiday seem so much more special to me. While that also exists with other holidays, such as Easter with the Easter Bunny, it just doesn’t seem like as big of a deal.

I also believe that Santa isn’t just about gifts; Santa is truly about the spirit of giving back to your greater community to spread happiness to everybody. This is a very good lesson to teach children because it shows them gratitude at a young age when their personality is very much still being developed.

Another aspect of Santa that I appreciate is that it teaches kids morals and shows them that bad behavior shouldn’t be rewarded. This not only benefits them as children but also will make them a better person overall and a better parent in the future. Santa very much reflects the idea that what goes around comes around and I think that’s a very important lesson to learn in our world.

Santa also serves as a bit of a right of passage as a child. The moment that a child finds out that Santa isn’t real is one that many people still remember years later. For me personally, I unfortunately had it ruined for me by my brother at the age of seven. This never created resentment for the holiday, but instead just opened up a new chapter in the way that I celebrate Christmas in my life.

From there on, I began being able to help my mom wrap presents for my siblings as well as play the role of Santa in a response letter occasionally, and getting to eat the cookies and milk didn’t hurt either. I think this is a very positive way of transitioning the way that your child celebrates the holiday because instead of just finding out that Santa’s not real and leaving your child feeling betrayed, you get them much more involved in the holiday and let them join in on the fun for their younger siblings, cousins or anybody else in their life.

What it means to be a real leader Previous
Patrick’s Politics Talks: Student debt Next 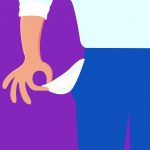