After a social involving a controversial theme and alcohol, Alpha Sigma Phi deals with consequences 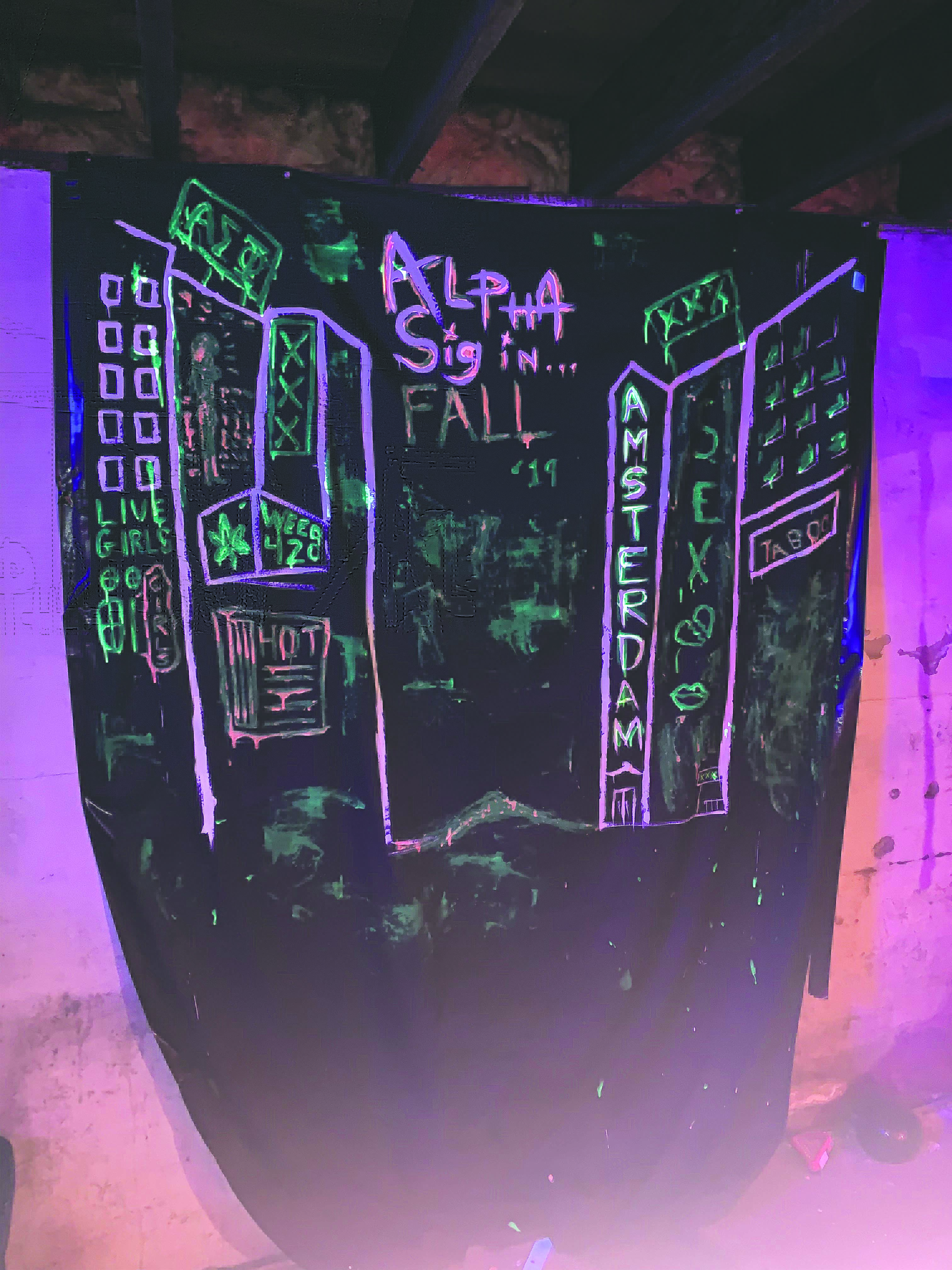 On Monday, November 18, The Equinox received an email from a student, whose name is withheld, regarding an alleged social event held by the on-campus fraternity Alpha Sigma Phi. The theme of the alleged event was the Amsterdam red-light district, an area of Amsterdam known for its brothels and explicit storefronts.

Former Coordinator of Student Activities and Organizations Britany Gallagher, who also oversaw Greek Life, said that this formal was a registered social event with the college.

“Socials for any fraternity or sorority are required to be registered with our office and it was registered,” Gallagher said. “I’ve been working with some of the people in Interfraternity Council (IFC) as well as our department to have some of those conversations with the chapter. At this point it’s up to the Interfraternity Council to use their bylaws to hold a meeting and make a determination as to whether or not those bylaws were in fact violated and if so what possible ramifications they will decide upon at that point.”

According to the student head of fraternities Samuel Clough, fraternities will host formal events such as this one a couple of times per academic year.

“Formal events are more infrequent. They’re usually set up once or twice a year from an individual organization. Usually for a formal, alumni try to show up if they can. Formals are a little bit more rare, but you dress up and you’re kind of bougie for the night. You try to have fun in a classy, upscale type of way,” Clough said.

The unnamed student described what they saw the night of the formal.

According to the student, another issue with the fraternity’s social, aside from the theme, was the manner in which alcohol was served to attendees.

“At other formals, I’ve seen bartenders. You had options of what you wanted and they’d make it in front of you and hand you a cup with your name on it. At this party, it was just three tubs and they were just filled with alcohol and the only way you could tell what was in each drink was the wall of alcohol on top of it, so there wasn’t any indication of what was in it,” the student said. “I just thought it was irresponsible. I just don’t know why that was allowed to happen.”

Wellness Center counselor and Addiction Specialist Melissa Langill said that this is an example of unsafe drinking.

“There are major safety concerns there. You don’t know what’s in those bottles [tubs], you don’t who put those there, you don’t know how many people have been drinking directly from them. There are so many things you don’t know,” Langill said. “You want to know what your risk level is so you can stay healthy. It’s not necessarily about abstaining from everything, but it’s about staying safe. If you go to a party and there’s a tub of alcohol out, there are clearly some big risks there.”

The unnamed student echoed this concern. “I was disappointed more than anything and, seeing the drinks like that, easily something could have been slipped into them. You don’t know what you’re drinking. If I take a cup and if I scoop it out of there, I don’t know how much alcohol I’m getting and I don’t know how much juice I’m getting and that’s how people end up sick. I was disappointed. It made me sick to my stomach to see the alcohol like that. That’s the first thing that crossed my mind; that’s so dangerous and no one else thought of it.”

Associate Professor of Women’s and Gender Studies Taneem Husain provided some insight on this issue in terms of gender inclusivity and making people feel comfortable in these situations.

“If [the student] was disturbed by it, then I think it shows that [the fraternity has] some thinking to do about who their audiences are, whether or not the women who are coming to these parties feel comfortable and if they want women to come to their parties they can ask themselves: what are ways that they can feel safe and welcomed? Maybe this wasn’t the best idea to do that,” Husain said.

Husain also said that this situation could be taken as a learning experience for the fraternity and for others on campus.

“I would hope that the students take this and say, ‘Wow, I didn’t realize that someone would feel uncomfortable’ and ‘what can I do to make sure that everyone who’s part of this college community is comfortable?’ We are always growing as people and if a student felt uncomfortable and wants to attend these events, something like encouraging students to reflect on who they are as a people, who they are (in this case, as men), that’s not a bad thing, just to think about yourself and think about what kind of a person you want to be,” Husain said.

President of Alpha Sigma Phi Colin Bent said that is exactly what the fraternity looks to do moving forward.

“Our fraternity values teach us to be introspective and to not shrink from adversity, and thus we will use this experience as a learning opportunity,” Bent said. “We have developed a restorative action plan and look forward to working collaboratively with the professional staff at the college, our peers in the IFC, our local advisors and fraternity staff to ensure the success of future events associated with Alpha Sigma Phi.”

KSC President Melinda Treadwell said that the manner in which this event was carried out is not reflective of the college’s values.

“If we have breaches of conduct policy, we’ll attend to those. If we have breaches of our values, we’ll attend to those. The Owl Code is open in the sense that we will be respectful and kind to one another and much of what I read in that [unnamed student’s] email would question whether those values were upheld. This is something we’ll investigate and take action around if proven,” Treadwell said. “I’m thankful for someone rising up and saying something about it. That matters greatly to me. Not knowing about this would mean that we don’t do anything about it. I just wish that it hadn’t happened, if it did happen the way it’s characterized.”