“At Pride Prom, a lot of those rules and expectations are removed,” said Hunter Kirschner the organizer for KSC Pride’s Pride Prom that was held this past Saturday. “Students are able to dress however they wish and bring whomever they wish, including no date at all,” said Kirschner.

“KSC’s Pride Prom is an annual event to celebrate the connections and community formed at Keene State. Each year around this time, KSC Pride organizes this event to be able to bring people together to express themselves through dance, dress and celebration,” said Kirschner.

Pride Prom is aimed toward members of the LGBTQ community who may have not had a positive experience with their high school proms.

First-year student Katherine Faulhaber said that Pride Prom is an accepting place for people who did not feel accepted at their high school proms. “In high school not everyone feels comfortable going to prom with who they want to go with, so this is an opportunity for people to feel like they can go with whoever they want and be accepted,” stated Faulhaber.

According to Kirschner, many LGBTQ  identifying high school students were unable to dress in ways that affirmed their gender identity at their high school prom. This made many students refuse to attend the event.

KSC’s Pride Prom sets itself apart from high school proms because KSC offers a place where there are no expectations of who anyone should be. Kirschner said, “That formality of high school prom also brings with it other expectations of gender, sexuality, race and class. There are particular ways that students are expected to behave and present themselves to be allowed to participate.”

The Pride Prom allows students to get a second chance at prom, especially if they did not experience prom in high school.

“Coming from a catholic high school, students were never allowed to bring dates of the same gender to homecoming or junior and senior prom,” first-year Allison Newey, who attended the event, said. “This created issues for the LGBTQ couples at the school who were required to have a separate person of the opposite gender bring them to prom. Having events like Pride Prom allows LGBTQ students here at Keene to have a healthy, positive prom experience,” expressed Newey.

Pride Prom also allows students to feel like they can be themselves in a safe environment. Faulhaber expressed that Pride Prom was a great way to meet new people and to be in a place where people feel safe and accepted around the LGBTQ community. The prom’s theme was “To The Moon and Back To Hollywood.” Although there was a theme, Kirschner stated that students could wear whatever they wanted. “Students are encouraged to wear the clothes that best reflect who they are or how they are feeling that night. It is a night of self-expression and affirmation of that expression,” Kirschner explained. “Too often, LGBTQ people are forced to conform to gender norms or otherwise hide who they are.”

Since the Pride Prom was held a few days before Halloween, Kirschner believes that the event was a great time for students to experiment with their gender expression.

Living in impermanence Previous
Raining gold in the semifinals Next 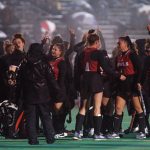