As a former resident of Monadnock Hall, I can confidently say that it was no pleasure living there. However, as Monadnock Hall slowly progresses toward becoming an optic hub, maybe it has a second chance at  life.

In no way, shape or form do I believe that Monadnock Hall was ready to house students during my time there. From overflowing toilets that led to flooding bathrooms, bats in the hall and mice in the rooms (each floor had its own mice counter and residents tried to see which hall had the most mice), to the 70s themed lobby and the overall uncleanliness of the hall, it is safe to say that Monadnock Hall was not for the weak.

However, just because Monadnock Hall is not suited for residents does not mean that the building has to go to waste. The building is currently getting ready to be used as an optics hub. According to a recent Equinox article, the “optics hub will function as an academic classroom with the added benefit of connecting students with future employers.”

On paper this sounds like a great opportunity for students to take advantage of. However, I feel like the school is hanging onto Monadnock Hall like that ex you just can’t let go of; but I think it’s time.

I do not believe that students will take advantage of the optics hub in the hall unless they are forced to. From my experience here at the school, I have noticed that so many resources that are available for students here on campus often go unused. If that happens with the optics hub, the school is throwing money at something that does not need to be funded.

On the topic of money, running a residence hall takes money and resources. Something that worries me is that keeping Monadnock Hall running is going to cost money and if no one uses the optics hub the school is wasting money. It is no secret that Keene State is already in a deficit, although we are working to get out of it. If the optics hub does not work then it is wasted money that could have gone to improving dorms, academic buildings or clubs on campus.

I have also heard talks of the school planning on tearing down Monadnock Hall and building a new residence hall, academic building or a new green space such as a new quad. There are many possibilities for the school to make a great decision with those possibilities. For example if the school built a new academic building or res hall, it could possibly drive more students to attend. The school already has very low enrollment for its size so if Monadnock Hall gets transformed into something new I feel as if that would be beneficial to the school.

As a former tour guide, I used to bring prospective students through Monadnock Hall. You can probably guess their reaction if you have ever been inside of the building. I would have to explain that this building wouldn’t be used and that the rest of the dorms do not look like this, but from the look on their faces I could tell they were very unsure.

I think the school has a lot to think about with the use of Monadnock Hall. I hope the optics hub does great and I wish it the best. However, I feel that Monadnock Hall is becoming an eyesore and should not exist anymore.

DISCLAIMER: This article is the sole opinion of Connor Crawford 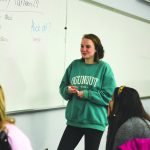