The lit-up stage was equipped with four band members from Dover, New Hampshire tuning their instruments by the name of Greed Island.

This WKNH-run event took place Friday night at 7:30 p.m. in the Night Owl Cafe in the Student Center. WKNH invited not only the alternative rock band Greed Island but also self-proclaimed Sound artist, performance artist and composer Id M Theft Able from Portland, Maine. The event was also an open mic after both artists were done performing.

First-year John Patrick Hale, a DJ for WKNH, was in attendance at the event. “We’re putting it on, so I figured why not?” said Hale. Even though he didn’t know anyone performing, he still wanted to show his support. Hale said, “I met them (WKNH) originally at the student involvement fair along at the beginning of the year. It was one of the things I considered trying and went in, passed the test, and it worked. That’s how it came to be!”

Performer Id M Theft Able talked about his style of music and what exactly he does. “I do a lot of extensive vocal techniques. In the sound-art world they call it ‘sound poetry,’ but it usually implies people are doing odd things with their voice and text. It’s really tough to succinctly describe because in some ways I’m not noise enough for the noise folks. It’s improvisation but it’s not jazz per se. Although it’s influenced by jazz and noise, there are a lot of other influences in there like rock or hip hop; those are a bit less obvious. Those are all a part of it, but the best way to put it is that I’m a sound artist,” said Able.

Able explained his situation. “I forgot several crucial pieces of equipment at home so there’s going to be an extra level of improvisation that I even anticipated. I was driving here thinking I knew what the ingredients were but not the recipe, so to speak,” said Abel. He continues “I knew what I had but I didn’t know exactly what to do with it. Now I know what I have but I don’t have what I thought I had. Here was a couple of definite things I was gonna do, but those are all out the window. As of right now I know I’m gonna play my amplified surface and do some extended vocal technique stuff with my voice and beyond that I don’t have a single plan. It’s a little nerve-racking and exciting.”

Introducing Greed Island for the was third year was WKNH Station Manager Jacob Allen. “I’m a part of the E-board and we’re in charge of setting up the event and making the best experience for the artist,” he explained.

Allen mentioned he knew both of the artists performing and reminisced on past open mic and concert nights. “Even before I started working at WKNH I started going just because of how much fun it is. It’s not everyday where you have two bands from around and, sometimes, outside New England to play a show here,” he said.

For the open mic portion of the night, Allen said he was planning on performing. “It’s going to be loud and hopefully we can make everyone laugh,” he said. 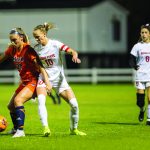 Meet the Captain: Patricia Norton Previous
Inside Intramurals Next 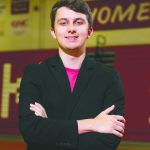