Skateboarding is both a sport and a lifestyle. It brings together communities and provides a brotherhood of fellow skateboarders all around the world.

However, skateboarding has been looked down upon since its birth due to a few factors. Skaters take public spaces and make them their own when skating in the streets. They can create hazards for other people and they destroy private property. Also, skateboarding is extremely noisy, creating distraction and annoyance for anybody around. Skaters have also been referred to as druggies, dropouts, lazy, and many other things.

According to the Facebook page for the Keene skatepark, it’s located on Gilbo Avenue and was created in 1997 by a group of young people who wanted a safe place to skateboard. As a result, they started a movement for the creation of the park and raised $75,000 with the help of the city of Keene itself. With the money raised, the park was constructed using only plywood and sheet metal, materials that are mediocre at best for a fully functioning skateboard park.

Today, the skateboard park is run down and poses safety hazards to individuals using the facility. The concrete throughout the park is extremely rough and broken up in certain areas.

Broken glass can be found around the park in certain corners. Sheet metal and plywood used in the ramps is now warped and leaves skaters unable to confidently skate without possibly getting hurt. The metal on the half pipe is also deformed and has parts that are jutting out, waiting for someone to cut themselves on.

People of all ages come to the skatepark to skateboard, rollerblade, bicycle, scooter and other similar activities that a skatepark advocates for. Children go to the park while their parents have no idea what kind of hazards are evident. These hazards are most threatening for younger kids, however anyone using the park is at risk of injury.

Andrew Bohannon from the Keene parks and recreation center had more information about the skatepark. Bohannon said, “The Tony Hawk Foundation has given us $10,000 to recreate the skatepark. The fundraising effort is currently at $115,000 of $300,000. If reached, the park will be built next year as part of the new Arts and Culture Corridor and would be located on the opposite end of the current location near School Street.” He also added, “The City of Keene was one of the first in the state to build a park back in 1997, however the materials made of wood and steel are not conducive to NH weather. Structurally the park is sound, however, the constant replacement of boards for transitions create  constant  maintenance issues. The City annually spends over $1000 on routine maintenance.”

Bohannon also said, “Skate parks play a vital role within a community, as an opportunity to provide recreation to a demographic that has chosen to not play team sports, or likes thrill sports. Individuals have an opportunity to share tricks, create social networks, push their abilities and gain confidence in a way they may not have thought they could.”

Harrison Paletta can be contacted at hpaletta@kscequinox.com 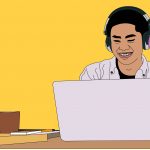 Feeling the good vibrations Previous
Once an Owl, always an Owl Next