As the presidential primaries approach, campaigns are trying to recruit students to get involved. On Wednesday, October 16, a panel of seven representatives from the Cory Booker, Pete Buttigieg, Kamala Harris, Bernie Sanders and Elizabeth Warren campaigns came to Rhodes Hall to talk to students about getting involved in the election process. All of the candidates represented are democrats. Additionally, a representative from former Vice President Joe Biden’s campaign planned to attend but was unable. The representatives who were sent held a variety of positions, including field organizers, press secretaries and data analysts.

All of the representatives who came had prior experience working with political campaigns, but their political journeys varied. Some candidates, such as Conner Jure of the Booker campaign, applied for jobs with many different campaigns, while others such as Colleen Willis of the Buttigieg campaign, already knew which candidate she wanted to work for.

Jure became involved in politics while interning for his congressman in Florida after dropping out of college. This lead to an opportunity to work for the Democratic Party during the midterms, and they managed to flip Jure’s county blue, the largest county that voted for Donald Trump in 2016.

“I applied to multiple campaigns because we have so many good candidates, but Booker was one of the first ones that I applied to because he’s been a leader on a lot of issues that have impacted me directly, coming from Florida, particularly gun violence prevention and the Climate Crisis,” Jure said.

Colleen Willis works for Buttigieg, commonly known as “Mayor Pete” due to his position as the mayor of South Bend, Indiana, as a field organizer. She graduated from Keene State College in 2018 with a degree in political science but she felt disillusioned by the results of the 2016 Presidential Election, until she read Buttigieg’s memoir “Shortest Way Home: One Mayor’s Challenge and a Model for America’s Future.”

John Entler of the Kamala Harris Campaign worked for Governor Tom Wolf’s Campaign in 2018, campaigning for the Governor in rural Pennsylvania.

“I was in coal country, the heart of Trump country. I then got sent down to Florida to work on the recount team,” Entler said.

He became interested in joining the Harris Campaign when it launched in February of this year. He had already been following Harris and was impressed with her track record as Attorney General of California. Entler said that when he started campaign work, he did not have any connections to the campaign.

“I knew one person, but it was another organizer, so I didn’t have a direct connection. I sent a bunch of emails because I knew that I wanted to work in a rural area, because I knew that’s where a lot of the problems came about in 2016,” Entler said.

His campaign work during the 2018 midterms provided him with a network that made it easier for him to get a job working on a presidential campaign.

“I’m with Bernie in 2020. I’m a campus organizer and I’m also one of the shadow people that emails or texts you,” said Jess Weldon.

Before this Weldon worked as a teacher and at a non-profit. Her career working in politics began in 2012 when she applied for a fellowship online to work for Obama’s reelection campaign.

Field organizers have to be ready and willing to move across the country at a moment’s notice.

“After I got the job I was told I had two days to get to San Antonio to start work,” Weldon said.

The Elizabeth Warren campus organizer at KSC Abby Cox said that anyone interested in getting involved with a campaign should go for it.

“I had heard that just getting in the door with a campaign is really hard and you have to know somebody, but I didn’t know anybody with this campaign,” Cox said. “If you’re interested and a campaign website is accepting applications, just submit your resume and your cover letter; it could lead to something.”

Kristen Morris is the New Hampshire Press Secretary for the Elizabeth Warren Campaign.

“My job is working with the press, everything from campus news to WMDR,” Morris said. Morris’ job is not strictly relegated to New Hampshire press; she has to work with other states’ press during events that happen near the border. For example, whenever Warren comes to Keene, Morris also has to work with press from Vermont.

Jure, Entler and Willis all agreed that even though their respective candidates are performing relatively poorly in polls compared to Biden, Warren and Sanders, this is not a cause of distress for them or their coworkers.

“At this point in the Republican primaries, Rudi Guliani was leading by 10 points. Twenty-eight days before the Iowa Caucus, John Kerry was polling at two or three percent and he wound up winning the nomination,” Jure said.

According to them, polling is just one indication of how a candidate is doing.

Weldon referred to this as the “polar coaster” and said that they try not to focus on polls.

“The polls are constantly changing and it doesn’t affect your work, it only affects your mood. The only poll that matters is the election,” Weldon said.

Most of the representatives on the panel were field organizers for their respective campaigns.

“A field organizer is the face of the campaign in a given area that’s referred to as a ‘turf,’” Jure said.

The job of a field organizer involves meeting with people, activists, officials and organizing events.

Campaign staffers are generally respectful of other campaigns, and deny any attempts at intra-campaign sabotage.

“Everyone on this panel is someone that I personally like and would not mind sharing a meal with,” Weldon said.

Campaigns are regularly reorganized during the course of the campaign trail, particularly after primaries conclude or a candidate has received their party’s nomination. Weldon said that when the New Hampshire Primary is over, she and the other staffers working in New Hampshire will have to seek new jobs in other parts of the country. Weldon said that they try to hire from within the campaign to fulfill these jobs, but as a nominee becomes more apparent more jobs open up to other people as well.

“If you think a candidate is going to win the nomination and you want a job through November, the best thing is to get in early with the campaign and be ready to move,” Weldon said.

“Every time a position is available, per our union contract, that position has to be listed within our organization for 72 hours, so priority is given to people already on the campaign,” Weldon said.

The panelists all agreed that while campaign work is rewarding, it is also an exhausting experience. Everyone agreed that all they want to do when a campaign is over is to sleep for a few weeks.

John Iacobucci, President of the Keene State College Republicans, was disappointed by the lack of KSC student attendance at the panel.

“It’s discouraging considering our political climate. I’m a republican and this was not my party, but I still understand the importance of the public political process and I think it is important to hear everybody out,” Iacobucci said.

He added that students living in New Hampshire have a unique opportunity to participate in politics due both to New Hampshire being the first primary state and the more intimate nature of town hall meetings in the Granite State, versus the large scale rallies in arenas that are commonly held in other states.

The staffers have all personally met the candidates they work for.

“When I started working, I really hoped that I might get to meet Elizabeth Warren at some point, and now I’ve met her twice,” Cox said.

Provost Program Manager Kimberly Schmidl-Gagne organizes civic engagement opportunities on campus, including debate watch parties and campaign rallies for candidates. The panel in Rhodes was intended to be a “buffet” of sorts for students to learn more about the different campaigns and candidates all in one place. 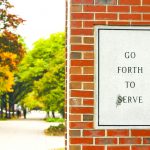