Bookstore services for all University System of New Hampshire schools have just gone out to bid through a request for proposals (RFP) process according to Student Government Advisor Jennifer Ferrell. Ferrell didn’t attend the student assembly, but she sent a message to the assembly. Ferrell said the current agreement of Keene State College with Barnes & Noble is up at the end of the fiscal year in June 2020. She said that she is in the group working through this process and will be updating the student leaders.

Student Body President Davis Bernstein informed the assembly about the upcoming Pumpkin Lobotomy event on October 25. He also reminded the assembly of the president dinner on December 2. The Class of 2022 is having a Chipotle fundraiser on October 26, according to the Vice President of Class 2022 Theo Avent.

The assembly meets every Tuesday at 6:30 p.m.

College Senate Previous
Church, State, and the great debate Next 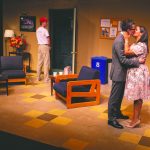