A Keene man pulled a gun on Keene State College students outside their house during a fight last Sunday, October 20.

The suspect was identified as David E. Brown, 30. Brown was videotaped arguing with a group of male students outside their rental home on Grove Street.

The footage showed the students, Brown and a woman all yelling at each other in the front yard. The woman is seen trying to pull Brown away from the house and warning the students to go inside and close their door “cause you’re not going to like what happens.”

After one of the students allegedly says that Brown looks ridiculous, Brown pounces on the student, but a student on the porch jumps on Brown and two bystanders join in, punching Brown while the woman tries to pull them off of him. Brown’s shirt then gets ripped off and he pulls a pistol from his waist. He can be seen cocking the gun as the students run inside their home.

Brown was arrested by the Keene Police Department on charges of criminal threatening with a firearm and simple assault. He was later arraigned on Monday, October 21, for charges of felony criminal threatening and misdemeanor simple assault. He was released on personal recognizance bail on the terms that he can not possess any firearms, has to live in a different part of Keene and can have no contact with the students involved.

The students involved declined to comment until this issue is settled in court.

Jack Hanson can be contacted at 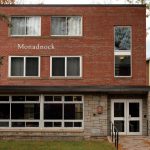