Is it right for U.S. detention facilities at the U.S. and Mexico border to be called ‘concentration camps’? On Tuesday, September 24, the Cohen Center for Holocaust and Genocide Studies held an open conversation regarding this issue of terminology.

Coordinator of Educational Outreach for the Cohen Center Tom White led the conversation alongside Dean of Mason Library Celia Rabinowitz. In recent months, as activity along the U.S. and Mexico border heightened and detention facilities were constructed for immigrants crossing the border, the phrase ‘concentration camps’ was often used to describe the facilities, most notably by U.S. Representative Alexandria Ocasio Cortez.

This statement resulted in about 400 academics and scholars signing a document stating that an essential part of history is comparing terms and people and that this term cannot be isolated to only reference one specific event. Several people from the Holocaust and Genocide Studies department at KSC, including Rabinowitz and White, signed the document.

White also noted that the museum is government-funded and that an appointee of President Trump is directing the museum’s statements. This is the first time the museum has made a statement on a political issue.

According to the organization Common Dreams, one part of the letter stated, “The museum’s decision to completely reject drawing any possible analogies to the Holocaust, or to the events leading up to it, is fundamentally ahistorical.”

According to White, no matter what one’s stance is on this issue, the fact that it is being talked about it is a good sign within itself.

White also read the literal definition of what a concentration camp is to the group, according to one of the historians from KSC’s archives. The criteria that was stated included forced incarceration without trial, separation of families, harsh physical conditions, used out of fear and hid from public view or inspection, pseudo military or police appearance, possible use of forced labor, denial of basic human rights and exposure to arbitrary violence and cruelty.

“Every one of those has been documented as having taken place in these border facilities,” White said. “How do we use this as a way to talk to each other about what may be at stake?”

One attendee of the conversation said that being able to use terminology, even if incorrectly, is important to facilitating these discussions to begin with.

“I think it’s an issue about the control of language and who can get to control it. I also think of the way the word lynching has been normalized and taken out of context; rape too,” she said. “I also find that stifling the word or being so protective of it can also stifle the conversations that are needed. Maybe these are opportunities to have these important conversations rather than having people just not talk. If they can’t use the language even mistakenly, then we can’t have the conversations.” 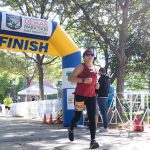