Equinox Staff
1
The 42nd annual Clarence DeMar marathon was held on Sunday, September 29, 2019. The marathon is a 26.2 mile course that begins in Gilsum and ends on Appian Way at KSC. The marathon honors former Keene resident Clarence DeMar, who was known for running everywhere he went. He notably overcame health troubles and poverty and became a seven-time B.A.A. Boston Marathon champion, an Olympic medalist and an international running icon. To this day, no one has ever broken his record number of Boston wins.
Student Assembly 10.3.19 Previous
Rocking in the rain Next 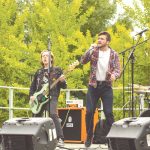