Risk it for a quick hit: the vaping gamble

Before I delve into the meat of this article, I would like to ask the reader a question: If you vape, what is your reason as to why you do it?

On September 11, 2019, President Donald J. Trump announced that the best course of action to fight the e-cigarette epidemic is a ban on nearly all flavored e-cigarette products. The only flavored products that would be exempt from this ban are tobacco flavored vapes. I believe that the Trump administration is dealing with this whole situation the wrong way. I believe that instead of just banning most flavored vaping products all at once, they should crack down on the stores illegally selling these products to underage buyers.

I feel that JUUL Labs is doing a better job at trying to not promote their products to minors than the majority of other manufacturers. JUUL has strict marketing and social media guidelines that they follow. One of their guidelines that stands out to me is that they state that their product is not intended for people who have never smoked and former smokers. This stands out to me because the Altria Group owns a 35 percent stake in JUUL Labs. The Altria Group owns Philip Morris USA and they are the owners of Marlboro Cigarettes. Since the company that owns Marlboro has a large stake in JUUL Labs, I would assume that they would try and hide this statement better, but it is the third guideline that they follow.

I believe that if someone wants to legally purchase any product that contains nicotine in it, then they should have to be over the age of 25. My reasoning behind this idea is the fact that the average human brain doesn’t fully develop until age 25. So someone who is looking to start vaping or smoking should have to wait until their brain is fully developed before they begin. Nicotine is a highly addictive substance due to the fact that when nicotine is consumed, dopamine is sent to the brain. Dopamine tells the brain to repeat that behavior/action over and over again. The big difference between receiving dopamine from scoring the game-winning goal and taking a rip from a vape is that you only get hit with dopamine once but when you take a fat rip from your Suorin you receive a hit every single time you inhale the aerosol.

Now I am going to go back and address the question that I asked the reader at the beginning of this article. If you do vape but you don’t have any reasoning behind why you do it, then why are you even doing it in the first place? It may make you feel good now but it will eventually catch up to you. 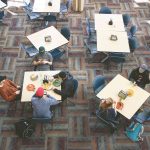 Risk it for a quick hit: the vaping gamble