Student organizations compose budgets based on their needs in the beginning of each academic year. These budgets factor in supply demands, travel costs and anything else necessary to keep them functioning in their role on campus.

The money for the budgets for budgeted organizations come from student activity fee dollars, which is the fee that all students pay as part of their tuition and fees to attend KSC. So the pool of student activity fee dollars can fluctuate in the fall depending on enrollment. According to Director of Campus Life Jennifer Ferrell, having student organizations request their budget the same year that money will be used will help in ensuring a more accurate budget.

“What has happened historically has been by doing the budget process way in advance and using estimated dollar figures and things like that in the spring, come fall if we have any fluctuation in enrollment numbers or there isn’t the dollars, we already told those people that’s what they’re getting,” Ferrell said. “Student government now has to figure out how to make up the difference or not, so by doing it in the current year we’ve got a much more accurate count of how much money there is to begin with.”

College Budget Director Andre Jaeger said this change does not affect the process much, other than the timing aspect.

“For budgeted organizations it’s based on the size of dollars needed and frequency of use, the type of activities they’re doing and the possibility of liability on behalf of the institution. Any group that doesn’t fit into that mold are a non budgeted group,” Ferrell said.

An example of a budgeted group is The Equinox, WKNH, club sports and other large, active groups. Examples of non budgeted groups are campus eco, yoga club, geography club and Greek life organizations.

The reason for this change is because larger groups in the past had the tendency to know exactly what budget they needed and to spend that money, while smaller groups tended to not spend their full budget. With this new policy, non budgeted groups can request money for specific events or reasons through the financial committee at any point in the year.

“We had some groups not spend any of [their budget]. We couldn’t necessarily pull from them because it had been allocated to them, which had me thinking ‘oh this would’ve been great if that group could’ve had some (of the money)’. This is meant to get at some of those challenges so as the course of the year goes on, the groups that are actually active and doing stuff are the groups getting the money,” Ferrell said.

Treasurer of Student Assembly Maria Tenore said this helps save the college a step in the budgeting allocation process.

“All of student assembly found last year and in previous years that some of the clubs weren’t using all their money, that’s mostly the smaller clubs. It’s pretty much to save the school money and hold the clubs accountable to do their fundraisers. We’re just holding the money and the clubs can request it if they need it,” Tenore said.

The budget requests for budgeted organizations are due by Wednesday, September 11. Once budgeted groups submit their budget request via email to the financial committee, the committee will meet on Friday, September 13 to decide if the budgets are accurate or if the organization could use more or less money. On the following Tuesday the financial committee will meet with the entire student assembly to vote on their final budget decisions. Budgeted organizations can expect to have their money by October 2 or 3.

Any money from the budget that is not used throughout the academic year does not roll over into the following year. The only money that does roll over years is money made by the organizations themselves, from things like fundraising, ad revenue or ticket income. Leftover budget money goes into a reserve account. Organizations can then request money from the reserve account on a first come, first serve basis.

“I think it’s going to work out well. Smaller clubs don’t have a set budget like the bigger clubs need. Some clubs know how much money they have to request from the get-go,” Tenore said. 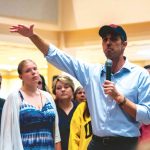 Beto Back in Keene Previous
Welcoming a new Global Fellow Next