A tragedy in Birmingham

The aftermath of the 16th Street Baptist Church bombing 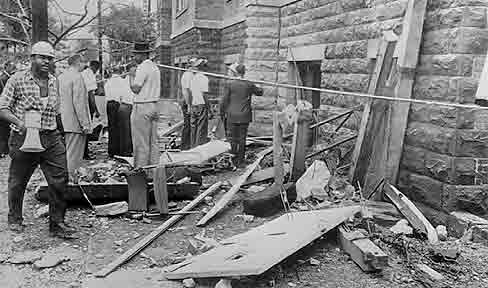 On September 15, 1963, the United States experienced a violent massacre. Before the Sunday morning service at the 16th Street Baptist Church, a predominantly African American population, a bomb exploded. Not only was this congregation considered “home” to a large population of negros, but it was also a well-known meeting place for civil rights leaders and nonviolent protesters. Despite the progress the civil rights movement made through the March on Washington just a few weeks prior, this event signified that our nation still remained racially divided.

Not only was there a great deal of prejudice occurring in Alabama at this time, but Brimingham was also the site of where one of the largest and most brutal chapters of the Ku Klux Klan (KKK) existed. There were many consistent bombings in the city of Birmingham in 1963, and Birmingham quickly earned the nickname of “Bombingham.” Due to the severe amounts of white supremacy that took place in Birmingham, the civil rights activists intentionally made Birmingham a primary site for desegregation in the south.

At 10:22 am that Sunday morning the bomb hit the east side of the church building. The interior walls of the church immediately caved in. The bombing killed four young girls who were attending religious education classes in the basement of the church. These four victims were: three 14-year-old girls named Addie Mae Collins, Cynthia Wesley and Carole Robertson, as well as 11-year-old Denise McNair. The bodies of these four victims were found beneath the remains of the church’s lavatory. This bombing also left many others injured, including a ten-year-old girl named Sarah Collins, who lost her right eye.

Sadly, this was the third bombing to take place in eleven days after the supreme court had demanded integration within Alabama’s school system. Directly following this violent act, there was a great outrage amongst protesters and police. The outraged people were trying to draw a national awareness of the never-ending struggle for the civil rights of African Americans. However, drawing this public attention was not easy considering that Birmingham was one of the most prejudiced cities in America at this time. Thousands of angry negro protesters rushed to gather at the site of the bombing. Police and state troopers were ordered by Alabama’s governor, Governor Wallace, to report to the site of the massacre to end to the protests. The abrupt stopping of these protests resulted in an outbreak of violence in Birmingham. A portion of the protesters were arrested, and two young African American men were killed.

Martin Luther King spoke in front of 8,000 people at the funeral of 3 of the 4 victims of the 16th Baptist Church bombing. Despite King’s plead for justice, nothing was done to reprimand this tragedy’s perpetrators until 1965. In 1965, the Federal Bureau of Investigation (FBI), had discovered information concerning the identity of one of the bombers. However, it was not until 1977 that Alabama’s attorney general, William J. Bazley, reopened the tragedy’s investigation. Upon this reopening, Klan leader Robert E. Chambliss, was convicted of murder and put into prison. This particular court case reopened again in 1980, 1988 and 1997. The reopenings led to the trials and convictions of Thomas Blanton and Bobby Frank in 2001 and 2002. The fourth suspect, Herman Frank Crash, died in 1994, and he never had the chance to go to trial.

The March on Washington helped bring awareness for the social injustice that plagued our country, however, this tragedy that is just one example of the later racial disparities that the civil rights movement had to overcome.