The Keene State College senate met for its 479th meeting Wednesday, Nov. 14 in the Mountainview Room of the Student Center.

During the courtesy period, Provost Nancy Fey-Yensan said that President Treadwell was unable to attend the meeting because she was hosting the Board of Trustees on campus for the day.

The Senate Executive Committee reported that it met on Nov. 7 and discussed next year’s ISP agenda and a resolution from the University of New Hampshire’s Senate that urged the state of New Hampshire to support higher education. The Committee discussed and voted to bring the resolution to the full senate, which subsequently voted on and passed the motion.

The last item on the Executive Committee’s agenda was regarding concerns over approach to the combined masters program in exercise science.

The Academic Standards Committee met twice, with its first meeting focusing around the work the committee does, and the second meeting featured discussion of a proposal for an art design BFA.

There was no new business. 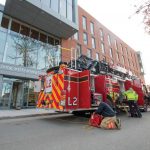