A Star is Born

Music in every word, in every expression or gesture, in every moment, guides the film and the audience through a heartbreaking story of love, talent, passion, loss and fame. “A Star Is Born” (2018) cynically depicts the music industry and its proclivity for forcing a false, hypocritical image, based on rules and mannerisms, onto the artists part of it. At the same time, it romantically portrays the invincible supremacy of passion, talent, love, and the need of poets and songwriters alike to speak their mind truthfully and show their heart to their audience, to pour their soul without fear or shame. Starring Lady Gaga and Bradley Cooper, and directorial debut for Bradley Cooper, A Star Is Born is an emotional ride through the indomitable power of music and love.

“A Star Is Born” is a critically acclaimed film and a box office success. The soundtrack was critically acclaimed. It was written by singer-songwriter Luke Nelson with the collaboration of various country songwriters. Lady Gaga and Bradley Cooper collaborated as well. The film was also praised for the cinematography, the performances both of Lady Gaga and Bradley Cooper and the direction of Cooper. On the review aggregator site Rotten Tomatoes the film received a 91% approval rating based on 267 reviews. “A Star Is Born” released October 5 with a budget of 30 million, and as of October 7, has grossed $56.6 million worldwide.

Songwriter and singer Ally lives with her widowed father, works as a waitress, and occasionally sings at a drag show. She meets famous singer-songwriter Jackson Maine after one of her performances. Insecure, talented but self-conscious Ally blossoms under the guide of troubled, broken, charming Jackson Maine; a beautiful love story is stunningly painted on the screen. A broken soul mends a soul. “A Star Is Born” is an extraordinary story about letting passion and love be your undenied guides and letting your vulnerability shine free. It is a story about losing sight of who you are, and hiding it soon after shedding light on it, under the pressures of fame and image. It is a story about allowing love and music to take the lead; to give your soul the strength to be free, out in the open, and honest.

Love and art are the powers that make our life a divine existence. Just as life can be guided by these marvelous, mysterious elements, “A Star Is Born” is. Even in silence, even when there are no words, no sounds, music and love are there, playing and resonating in the viewer’s mind. The ethereally affective love story moves the viewers. The mesmerizing images enchant their eyes. The music is the medium of the soul; Jackson and Ally’s souls, and their love shine through their music. No business, no hypocrisy, no greed can destroy and defeat art and love. 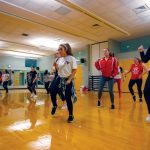 Dancing together Previous
Glitterati and Glamazons Next 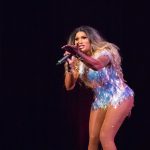