On Thursday, September 13 the Redfern Arts Center at Keene State College had its annual kick off party where students and adults of all ages showed up and got to witness some truly beautiful work done by students themselves. For the first time ever, the kick off party was held on stage.

While everyone was enjoying their social hour before the start of the informational session, when looking around the room everyone was able to see many different types of art. Looking off the stage into the audience were dancers in different spots performing various movements called spot dancing that allowed people to see a glance into the dance department. On stage, there was various paintings and sculptures placed out for display. There were puppets on display as well as many costume pieces that allowed people to see a part of the theatre department.  As everyone was taking everything in, Shannon Mayers, director of the Redfern Arts Center, was open to answering a few questions. Mayers said, “We make changes every year to this event but one change is that we decided was why don’t we invite everyone up on stage, we have so many Redfern patrons that usually sit in the audience but most of them have never been on stage.” That may sound like a small change, but as Mayers said, most have never been on a stage before so it’s a new experience for all.

As you continue to take everything in, looking through the pamphlets provided, one of Keene States first year students was very excited to be there. One first- year student here at Keene State College, said she was super excited about the theatre program.

When asked why she came to this event she responded, “There is a lot of events at the Redfern that I am excited to attend. I am getting involved in theatre and everything and this is just kind of my scene.”

The student said that she hopes to get involved in many groups such as the ones at the Redfern to make her college experience everything she has hoped for.

But there was not just students at this event, there was many people who are either from Keene or are very involved in the Keene community that decided to come and check it out.

The Redfern staff such as Shannon Mayers was super excited to see everyone there and that it was a nice change of pace to see adults supporting their program said Mayers.

Shannon Mayers then went up and started talking about each style of art that is shown at the Redfern throughout the year.

The audience was  able to hear about the next dance showcase that is coming up next weekend and about the plays that are going on soon.

Viewers even got to see a quick preview of some of the students special work coming up.

At the end of the event, a Keene resident was willing to answer some questions such as how she liked the event.

She said, “It is the first time that I have been in the Redfern Arts Center but I find it very interesting that we are on the actual stage, you don’t normally get to do that. I also liked all the dancing and art that they put on display for us. Overall I really enjoyed it.”

Lauren Pearce can be contacted at 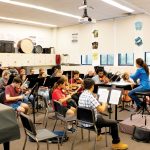