Music filled the air in Keene on Saturday, Sept. 1 as the city celebrated its annual Keene Music Festival.

The festival began with the first bands going on at 10 a.m. and ended with groups going on as late as 8:15 p.m. The event consisted of six different stages all around downtown Keene and hosted over 40 bands.

The festival featured The 123’s; a rock group made up of Keene State College (KSC) alumnus. The 123’s member and KSC class of 2010 graduate, Jordan Reynolds talked a little bit about his group prior to the show. “We play rock music. You know –  easy to listen to rock music inspired by Keene State’s own music department,” Reynolds said. 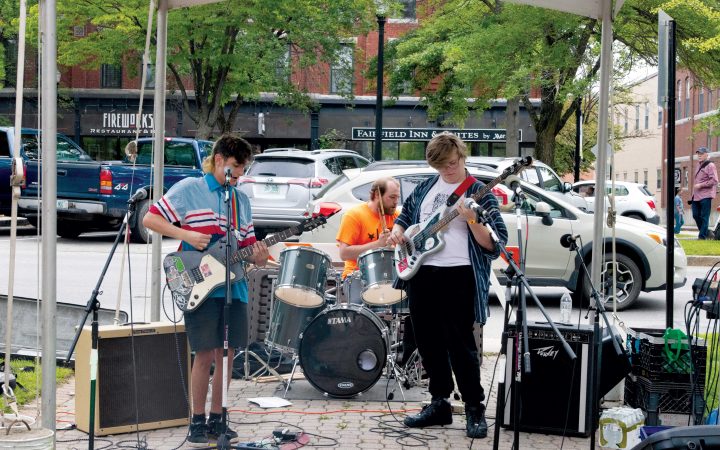 On Saturday September 1, musicians gathered in downtown Keene to celebrate the Keene Music Festival. The event consisted of over 40 bands playing on six different stages around the city.

Reynolds explained that coming from KSC the group learned about the event through the college. “We went to school here. We knew a couple of the organizers. Just through community involvement while we were here…,” Reynolds said.

The 123’s have been playing the festival for about five years now according to Reynolds, saying that they had “taken some hiatuses.”

Through all their year’s playing at the Keene Music Festival, Reynold’s said that the experience has always been enjoyable. “This thing is great. It’s nice to see people still come out for it, and we appreciate the people that put it on. It’s a fun event,” Reynolds said.

The festival brought people from all over New England to dowtown Keene. Event attendee from Connecticut James Day said he came to Keene to visit a friend, and was pleasantly surprised to discover that there was a music festival going on. “I saw the music festival going on, and my friend just came up at the start of the semester. This is the week we normally celebrate the kick off of the semester, so I decided to come up here,” Day continued. “I’ve never been to the music festival but I come to Keene a lot. I think it’s my favorite city in New England.”

When asked what he thought of the event overall, Day responded, “I think it’s a little spread out, and there’s not as much diversity as I thought there was going to be. Coming from more of a rural area, I was thinking there would be more folk and bluegrass here, but it’s a lot of alternative.”

Despite this, Day said the spread out nature of the groups turned out to be a good thing. “My favorite thing would be that it’s right on Main street, and the noise of the band doesn’t really overrun the ones down the street,” Day said.

Some of those playing in bands were lucky enough to have family and friends there to support them. Natalie Deline came  from Claremont, NH to support her boyfriend who was one of them members of the band Chodus. Deline explained that this was her first time attending the music festival. “I’ve come to Keene before but I’ve never been to this event,” she said. 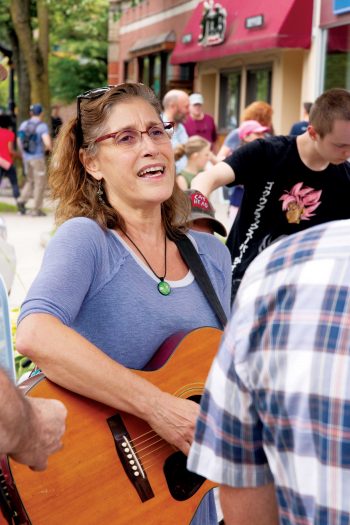 On Saturday September 1, musicians gathered in downtown Keene to celebrate the Keene Music Festival. The event consisted of over 40 bands playing on six different stages around the city.

Overall, Deline said that she enjoyed the event and its atmosphere. “It’s really cool honestly. The set up that’s going on is really cool. It’s a good vibe, it’s good energy,” she continued. “Everybody seems to be having a good time.”

Most of all, Deline said that her favorite part was seeing people enjoy her boyfriend’s music. “Hearing people like his music and the fact that there are a lot of people supporting him. This is a lot bigger community than Claremont is.”

Keene Music Festival is held each year the Saturday of Labor Day weekend. 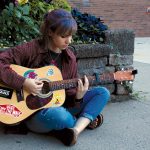 Creating her own sound Previous
Chock full of tryouts Next