Finding your path to success

Committing to things can be very difficult. Who would voluntarily sign up for four more years of schooling after barely surviving the past 12?
Actually a lot of people. According to the United States Department of Labor 66.7 percent of 2017 high school graduates were enrolled in colleges or universities. More than half of the graduating students thought going to college was the best choice for them, but what about the other 43 percent?
I always knew I wanted to go to college. I had no idea where or for what, but I was always told college was the next best thing. My parents told me I didn’t have to go, but I knew they really wanted me to.
All my friends were going to college; most of them knowing exactly where.
What I noticed is that mostly everyone thought they knew what they wanted after our high school graduation; but that wasn’t the case.
I know many people who go to their dream school only two semesters later realizing it just wasn’t the school for them. Stuff happens and even if it doesn’t work out for you the first time, try a different school.
When picking where I wanted to go I had to think about the size of the school, location and academics they offered. Although the energy at universities were desirable I knew I would be just another face to all my professors. I needed a smaller school, preferably closer to home and something that wouldn’t break the bank.
I knew that, but I still didn’t know if I was making the right decision. You probably won’t be 100 percent sure about your next move, but relax no one is, just make sure you know all your options.
Although attending college can be the “best choice” for someone, that doesn’t mean it’s the same for everyone. There is so many opportunities when leaving high school, you just have to know your choices and figure out personally which one you would succeed the most in.
If college doesn’t sound like something you’re interested in, seek elsewhere. Maybe you’ve always wanted to travel the world, experience different cultures and try new exotic foods.
If school isn’t your thing and you can’t even think about sitting through one more class, entering the workforce right out of high school is a great option too. Being able to start at an entry level job and then working your way to the top of that company can be very rewarding.
Serving for our country can be a temporary or long lasting experience that can be a great fit for some people. Don’t forget volunteering and charity work is also another alternative.
But what if you want to go to school, but your wallet is telling you no? Just wait, your time will come. Do not stress. Taking a gap year can be very helpful, especially for finding out what you’re interested in. Many students go into college and for their first two years are undecided. It’s not a bad decision, but waiting a year or two to figure out exactly what you want to gain at college can save you a couple thousand dollars in the end.
I came to Keene State College in the fall of 2016. I enrolled here with journalism as my major, even though I didn’t know what it really was or even what I wanted to get out of college. I am currently a junior still in the journalism program and I can gladly say that I’m so happy I made the decision to come to KSC and that I stuck with it.
I have not only became more informed, but I have found some of my best friends, became more involved and overall I am a more well-rounded person. This opportunity will help me become more prepared for the career I’ve always wanted.
I can’t stress enough how beneficial college has been for me personally. There are many different paths a student can take once out of high school.
No path is better than another, each way just opens up different experiences and opportunities. Figure out what plan you think works best for you and see how it goes!

Kiana Wright can be contacted at
kwright@kscequinox.com 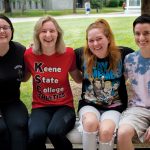 Finding your path to success