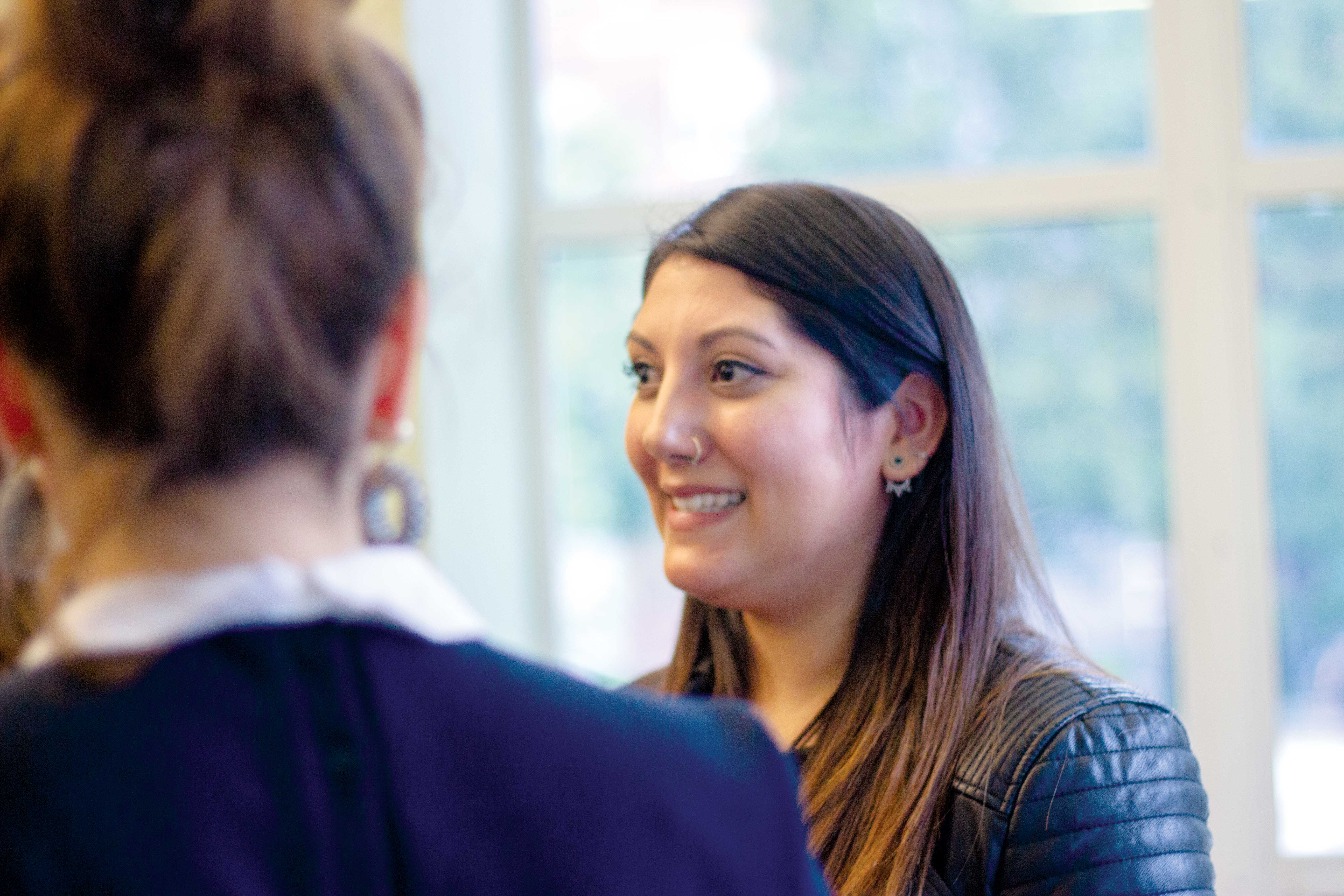 Patricia Perez Valdes is bringing her passion for human rights all the way from Santiago, Chile to Keene, New Hampshire this fall semester. On Wednesday September 13, the Holocaust and Genocide Studies department and the Cohen Center for Holocaust and Genocide Studies held a welcoming ceremony to honor this year’s KSC-AIPR (Keene State College-Auschwitz Institute for Peace and Reconciliation) Global Fellow, Patricia Perez Valdes, in the Student Center atrium.

The KSC-AIPR Global Fellowship is a joint initiative between KSC and AIPR where one individual who has participated in AIPR’s program and has applied for the semester at KSC is chosen to attend a fully funded semester-long fellowship, according to the Auschwitz Institute’s website. Valdes will be the second fellow welcomed on KSC’s campus.

According to assistant professor of Holocaust and Genocide Studies, Ashley Greene, “All of the global fellows go through an application process, in the end she was selected as the person we chose for her qualifications and her background and for what we felt she could bring to campus.”

“The motivation was if we could give the chance to someone who’s gone through that program [AIPR]  to come here and be with us for a semester to study, to think, to learn, to teach it would be a great gift for the college and a great gift for that person,” Waller said.

Valdes works at the Museum of Memory and Human Rights in Santiago, Chile researching topics related to justice, human rights and education. The museum, according to their website atlasobscura.com, is dedicated to commemorating the lives of the victims of human rights violations in Chile between 1973-1990. While at KSC, Valdes is developing a human rights curriculum for Chile and the museum where she works.

The welcoming reception for Valdes was put on by the Holocaust and Genocide Studies club. Club President and KSC senior Alexis Sanborn said that although she has not had the chance to meet Valdes outside of the reception, “We’re [the club] hoping to have her come and speak at a meeting, but I think she’s very interested in taking advantage of the resources here on campus, especially with the Cohen Center.”

At the reception, Valdes expressed her gratitude to be at KSC.

“I don’t have any words. You have been so nice to me, so welcome. Latin America has so many things to show to the world, so I feel very honored to be here right now,” said Valdes.

Valdes will be participating in a number of activities during her time here. “She’s sitting in on classes, she’s participating in things like the Holocaust and Genocide Studies reading group. She’s also having a chance to engage and interact in our classes and she’s teaching several guest lectures,” said Greene. Most Global Fellows only take eight credits during their time here, but according to Waller, Valdes will be taking four classes this semester.

Waller also hopes that Valdes walks away from this experience with many resources and knowledge. “I hope they [fellows] get a chance to pause and breathe and think and do the things that they typically can’t do in their busy jobs. Because we’re the only major in Holocaust and Genocide Studies in the country, it’s a great opportunity for them to take a wide range of classes,” said Waller.

Valdes said that she is happy to be here through this program. “This fellowship is such a great opportunity to me to learn from other professors, from such a proactive and involved community and to gain a knowledge that you can not find in other parts of the world. I hope I can be a contribution to the college as well as the learning experience that this fellowship will be to me,” said Valdes.