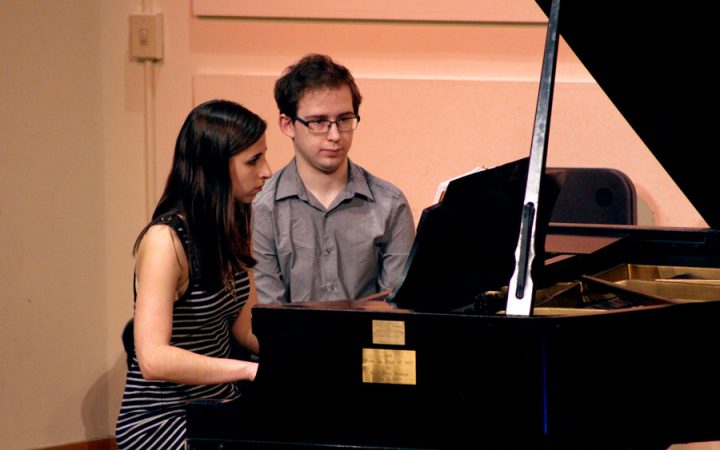 The recital ran for approximately one hour and displayed eight compositions by the six composers. Each composition was written by one of the six students, and performed by either other students, or faculty.

The night began with Edwards’ piece, “Cycled.” Edwards spoke briefly about his piece and described it as a “time of chaos in his life.” The tension ran from the saxophone, to the piano, then to the cello and then cycle back.

The next piece was “Forward. Stop. Reverse,” written by Wilderman. Wilderman described this piece as a project in which he wanted to take a melody and play it in reverse.

Next was Colgrove and her piece “Arabian Dances.” Colgrove snapped the audience back into reality with her playful tunes that hopped between the saxophone, cello and piano.

The next piece, “Challenging Times,” was by Blitchington. This piece featured one sole snare drum. The snare drum is known to be a loud and rattling instrument. However, this piece utilized the snare drum through unique rhythmic patterns and changes of tempo.

Following the snare drum solo was Martin and his piece “Whalesong.” Martin said he created his piece with the idea of having two contrasting melodies that harmonize when played together. Martin made this idea work as the saxophone and cello played their two melodies while the piano held the group together.

The third to last piece was another written by Edwards, and this one took more of a classical perspective. His piece, “Piano Sonata in C Major,” was an original piece inspired by great Romantic era composers. He had been working on this piece since the fall of 2017.

The second to last piece was “Mutatio,” another original composition by Wilderman. In this piece, Wilderman played with the rhythmic patterns to create another hypnotic feel. Wilderman conducted the vibraphone and two marimba players as he showed off another  piece.

The last piece was Hegeman’s “4HitCombo” in collaboration with the YouTube gaming group known as 4HitCombo. This performance was not live but rather was a video displaying gaming clips and music created through an 8-bit synthesizer.

Even though the composition program is relatively new to KSC, students are still writing their own music.

Audience member Siobhan Cooper said she “had a blast” and the show was “incredible.” When asked if she would recommend others watch the recital, she said, “Most definitely…”

Nicholas So can be contacted at nicholas.so@ksc.keene.edu

Instructing music Previous
Actors and directors in Play-a-Palooza Next 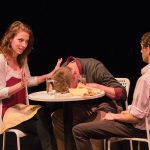