Actors and directors in Play-a-Palooza

For students in the Keene State College directing class, ten minutes is all it takes to tell a story. 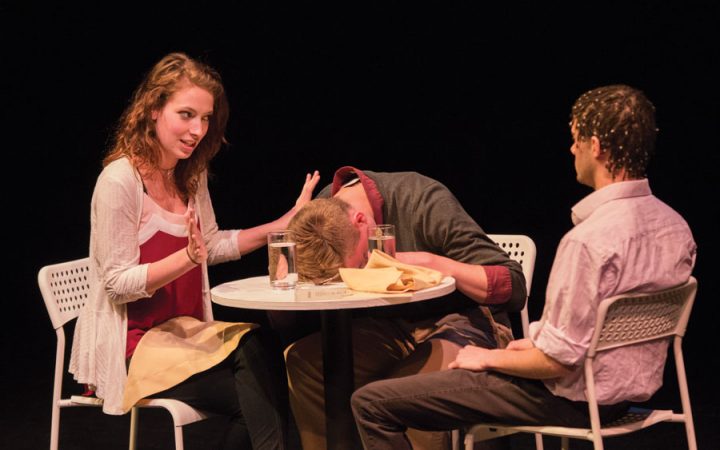 On Thursday, April 26, and Friday, April 27, an audience gathered in the Wright Theatre for “Play-a-Palooza.”

The performance consisted of seven ten-minute plays, which showcased the work of both student directors and actors.

Senior Patrick Byrne attended the event to support his roommate, Michael Lamare. “[My roommate] directed one of them, and he starred in one of the plays,” Byrne said.

“I thought they were really good, actually. I thought it was a lot of fun. I was impressed, and I thought all the students were pretty good actors.”

Each director had the opportunity to select any ten-minute play. Senior Lamare chose to direct the show’s fourth play, “Escape!” by Tennessee Williams. “I’m a big Tennessee Williams fan, and so I have a book of short plays by him and I found the one I directed in there,” Lamare said.

Although he had never directed a show before, Lamare said he liked the experience. “It was pretty cool. I worked pretty closely with the actors for like four hours a week for the last four weeks or so. It was really fun,” Lamare said.

Since it was Lamere’s first time directing, the experience of seeing his work on stage was relatively new to him. Lamare said, “It was pretty cool to see everything come together. At first I felt like it was all just rough, like broad strokes, and then, slowly, it all came together. When it all came together, it was really cool.”

Lamare also starred in the Senior Capstone performance with Sydney Miele, “The Property is Condemned” by Tennessee Williams.

Junior Erika Kucks performed in the first play, “Covers” by Sandra Perman, and the final one, “When Lydia Hinkley Gives a Bird the Bird” by James Still. In each performance, Kucks played what she described as “controversial characters.”

In the first play, she portrayed a pregnant teenager, while in the final performance, she portrayed a lesbian in the 1850s. Kucks said, “It’s controversial matters I feel that we portrayed in these plays, but it’s stuff that needs to be portrayed.”

Although Kucks didn’t direct any of the plays, she said the class focused more on the concept of hands on learning rather than just directing.

“It was all self-directing, self-acted and I’ve been working on it this whole semester. At the beginning, we were just doing these short skit scenes and stuff like that. Then we all did these ten-minute plays and we pulled them all together and created ‘Play-A-Palooza,’” Kucks said. “I’ve been working very hard for this whole semester, so I’m really excited that it came out the way it came out, and I’m glad that people came.”

Kucks said she was grateful to see “both sides of directing and acting, which was really interesting.”

Although the process was difficult at times, Kucks said, “It was a challenge as a whole for everybody, but I’m really glad that we did it.” 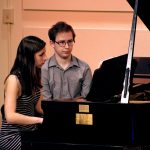 Actors and directors in Play-a-Palooza