Singing, dancing and acting. On Friday, April 20, students in Keene State College’s Opera Workshop class performed in their production of “The Fairy Queen.”

Although the class primarily focused on the singing technique of opera musicians, students were given the challenge to incorporate what they had learned into an acting performance.

Sophomore Emily McIntyre explained how adding the element of acting affected the performance. “The acting actually was pretty interesting because a lot of us have been in productions, either outside of the college or within the college. I’ve worked with so many of these people before and it’s just kind of something that comes along with it,” McIntyre said. “So even though everyone’s not a seasoned actor, people act while they perform and they act while they sing. So it’s something that really gets incorporated whether or not you really consider yourself an actor.”

McIntyre also explained the difficulty of executing the task. “I usually find it more difficult to act while singing, personally… Singing this kind of music versus singing musical theater music is very different, so it’s something that definitely gets pushed to the side when you’re focusing so much on technique, and you hear all the runs that they do, and how it’s so technically difficult,” McIntyre said.

Despite the challenge, McIntyre said she admired the idea of the performance. “I think the thing I enjoyed most about the performance was taking something that was so classic, Shakespeare, and kind of mixing it with this Purcell Opera. Two things that usually don’t go together and creating this sort of coherent piece out of the two of them,” McIntyre said.

McIntyre said the class began practicing with the live orchestra one week prior to the show’s opening.

However, one cast member didn’t begin much before that. First-year and acting major Laughlin Hentz joined the cast three weeks prior to the performance after receiving an email asking him to step up. Hentz said he was emailed after a cast member unexpectedly moved to pursue a job.

Hentz explained the struggle he faced with stepping into this role with little time to rehearse for it. “It was rough. I was kind of just thrown into the thick of it. I didn’t have enough time to learn the music and I’m not a singer, so I kind of just stood there in silence and did the acting parts,” Hentz said.

Hentz not only commented on the three-week time period he was given learn the role, but the little rehearsal time that was spent developing the part.

“It was only like two-hour rehearsals every week, so this was like 48 hours spread across like three months of rehearsals and I was only there for 12 of those hours, if even. I think the hardest part was just learning it all and getting thrown into it. I just went with the flow and kind of made it up as I went,” Hentz said.

All in all, Hentz said he felt the performance was an overall success. He said, “I think it went well. I think it’s a little awkward when I’m the only one not moving my mouth during songs.”

First-year and audience member Claire Fifield attended the performance out of curiosity. “I’ve been hearing them rehearse for a couple of weeks, so I wanted to see what it was going to be,” Fifield said. “I liked it, it was very well done.” 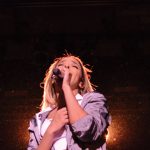 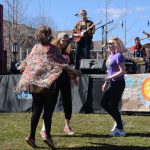