Honors in memory of students lost

Among the celebration and joy that is sure to be felt at Keene State College’s Commencement this coming May, there will also be moments of nostalgia and remembrance.

Both young men died earlier this academic year and were involved in the KSC community.

Provost and Vice President for Academic Affairs at KSC William Seigh explained the difference between these two degrees. “The Posthumous degree has been enabled by our policy for quite a while, and allows us to honor a deceased student who was in good standing and had completed a minimum of 90 credits. The In Memoriam degree was proposed this year to allow the campus to honor a student who was a member of our community but who may not have yet earned the credits to qualify for a Posthumous degree,” Seigh said.

The new In Memoriam degree will allow Powell’s friends and classmates to remember his impact on the campus and community.

During his time here,  Powell was working towards a degree in Music Technology and played in the KSC Orchestra.

Executive Assistant to the Provost Kim Harkness said, “The In Memoriam degree is an extension of that [Posthumous degree policy] proposed and approved this year in response to the desire to honor a students’ impact on our community.”

This new degree option also received the support and approval of the Provost and the College Senate.

The Posthumous degree option has been a part of the KSC policy for many years. Denninger was a communication major during his time at KSC, so his degree will be awarded with the Bachelor of Arts, if the Denninger family so chooses to participate.

Coordinator of College Ceremonies & Events Rebecca Dixon said that, unfortunately, it is not uncommon for a graduating class of around 1,000 students to have at least one Posthumous degree awarded.

“In both situations, there is an earnest desire to commemorate that a student was here as a member of our community, and deserves recognition for what they achieved as a Keene State student,” Seigh said.

As for who will be accepting the degrees on their behalves, Seigh said that it will depend on the preferences of the families.

Seigh is still conferring with both families, and as to whether or not they choose to participate in the ceremony, Denninger and Powell’s names will still appear in the Commencement program. “…as you can imagine, these are very sensitive situations with the families. We have to take our lead from them – how they would like to participate, if at all,” said Dixon.

Seigh also said, “It is our hope that, as somber as this is, it may bring some solace to friends, classmates and faculty members who knew these students and still feel the loss.” 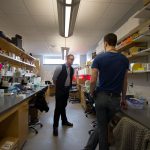 Honors in memory of students lost